Richmond is for Lincoln 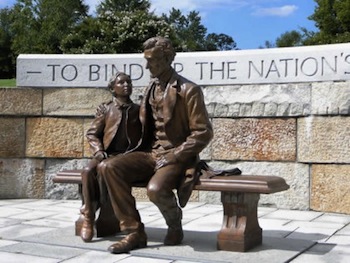 I am hoping to catch Spielberg’s Lincoln movie this weekend.  My plan is to write a review, but please don’t expect a narrowly-focused critique of how well the film reflects current Lincoln/Civil War historiography.  Such an approach almost always fails to capture the intention of why people make movies and why we go to see them.  As a historian and teacher, what I look forward to seeing is theatergoers and students who are sufficiently moved to learn more by picking up a book or traveling to the historic sites themselves.

The state’s department of tourism has already created a website that allows visitors to follow Lincoln’s movie and historical footsteps through Richmond and Petersburg.  They are assuming that the movie buzz will bring people to Richmond.  I assume the NPS will be offering guided tours and other materials to help tourists navigate their way through these two cities and we can assume that other historical institutions in the area will also benefit from increased traffic.

The tour offers a blend of Hollywood and history, with Richmond standing in for Washington, D.C., and historic Petersburg portraying itself. Lincoln spent a good deal of the final days of the Civil War in both cities. As emancipated people cheered, he famously walked the streets of the smoldering former capital of the Confederacy in April 1865 as it fell to Union forces. Lincoln also spent about two weeks in Petersburg, home to the longest military siege on American soil. Its architecture still bears the scars of the war, including cannonballs embedded in brick facades.

I just love the idea of visitors walking Richmond’s streets with Lincoln on their mind just as thousands did when he visited the city in April 1865.  It’s, after all,  American history, folks.

Next post: Smithsonian’s “The Civil War and American Art” Exhibition