Review of the Museum of the Confederacy – Appomattox 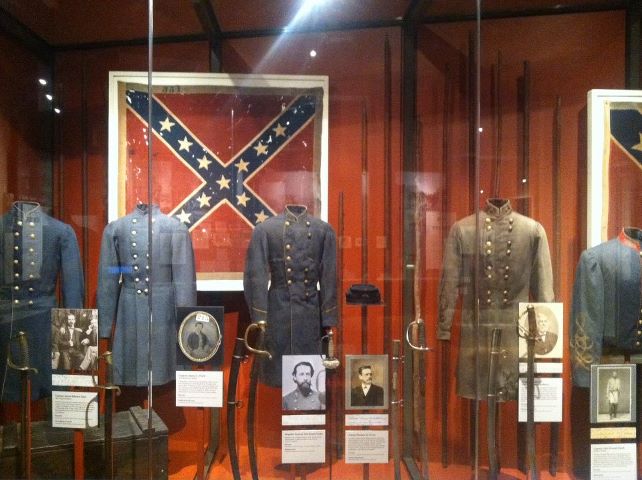 What follows is a guest post by Thom Bassett, who recently took a trip to Virginia to explore Civil War battlefields and other sites.  He took the time to visit the new MOC museum at Appomattox and sent along this review.  Thom teaches at Bryant University in Providence, R.I. He has written numerous essays for the New York Times Disunion blog and is currently working on a novel about William Tecumseh Sherman.

It’s unfortunate that in the minds of many the Museum of the Confederacy’s newly opened branch at Appomattox is associated exclusively with the ginned-up controversy about display there of the Confederate battle flag. For one thing, the museum staff seem heartily sick of the issue and those who protested the museum’s design: As I carefully began to ask about it during my visit this weekend, one of them interrupted me to scoff, “What the hell else did they want? We put the damn state flags outside!”

For another, and more important, the MoC-Appomattox overall is a superb example of sophisticated, accessible, evocative, intellectually honest public narrative about the Civil War. While it’s in some respects still very much a work in progress, the museum nonetheless already meaningfully informs and engages the public about the war and its significance today.

I’ll begin with aspects of the museum that are in my opinion comparatively less successful. The exhibition “Colors of Gray: Consecration and Controversy” is a decidedly uneven exploration of the history and uses of Confederate flags. While the exhibition includes some interesting and surprising information about army and regimental flags (it turns out, for example, that women’s bridal clothes were a popular choice for flag material), it falters on the subject of the national flags.

For one thing, the exhibition includes only the first and second national flags, even though the museum web site displays a picture of the third national flag as well. Moreover, while placards more than once make the salient point that some Southern heritage groups are as critical as civil rights groups of current (mis)uses of Confederate flags, particularly the Army of Northern Virginia’s (incorrectly called) “stars and bars,” the presentation on this issue lacks a clear thematic organization.

Perhaps to some extent my dissatisfaction with the “Colors of Gray” exhibition has to do with the contrasting directness with which the permanent exhibition presents a range of complex and, for some, uncomfortable fundamental truths about the Civil War. This occurs in a number of ways. For example, the opening audio-visual exhibit reminds visitors that white Southerners were not united in their feelings about secession or the resulting  war. This theme of southern disunion is repeated in other ways later, including in the exhibits about the arming of black southerners (which also demolishes, by the way, the lies regarding black Confederate soldiers).

But it’s the museum’s treatment of race and slavery that is most impressive. From the very first placard visitors see until the moment they exit the permanent exhibition, the MoC-Appomattox demonstrates the centrality of slavery and racial dominance to the causes of the war, the investment that virtually all white Southerners—slaveholders or not—had in perpetuating a slavery-based society, the efforts African-Americans made to liberate themselves as well as their contributions to the federal war effort, and the extent to which what followed the war blocked authentic national reconciliation.

The conclusion of the permanent exhibition, in my opinion, also shows forcefully that questions of the meaning of the war remain vitally important today. Visitors are left with an important challenge—to think and rethink their understanding of the war and the nation in its aftermath.

Even for those without a strong taste for questions of the war and public memory, there are other elements of the MoC-Appomattox that make it more than worth their while. The museum has on display items compelling to anyone interested in the war, including Lee’s sword and Patrick Cleburne’s frock coat. There are also many interactive exhibits, including one that allows visitors to look for the parole papers of Confederate ancestors. Finally, the museum’s use of contrasting scale, varied typography, lighting, and dimensionality makes the exhibits consistently engaging, kinetic, and stimulating.

Open only since March, the Appomattox branch of the Museum of the Confederacy still has room for improvement. But it already stands as a remarkable example of what substantive public history, imaginative curatorship, and cutting-edge museum design can achieve in informing and challenging our collective understanding of the Civil War.