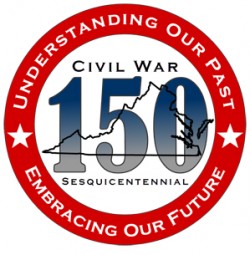 The Virginia Sesquicentennial Commission has issued a report on the progress and impact of its programming.  While living in Virginia I served as an adviser to the commission’s education committee.  I attended a few meetings and communicated via email with a number of members.  It was an honor to be involved.  The report can be downloaded here [PDF].  A brief overview of the report can be found at Clint Schemmer’s Past is Prologue.

Civil War tourism in Virginia is strong and growing, the commission reported.  On Virginia.org, Civil War-related views have increased 96 percent since 2011. Views of information about the national battlefield parks that interpret Virginia’s Civil War sites are up 181 percent, the panel said.  More than 100,000 people have downloaded the seven “battle apps” the Civil War Trust, with money from the state Department of Transportation, has created for smartphones and tablets. Three new apps are expected this year.  Last month, dozens of programs marking the 150th anniversary of the Battle of Fredericksburg drew nearly 10,000 participants, the report said.  In Spotsylvania County, battle re-enactments in 2012 and 2011 lured more than 13,000 visitors.  Last but not least, the state has awarded more than $8 million in matching grants to save battlefield land through the Virginia Civil War Sites Preservation Fund. The effort has saved 4,700 acres valued at more than $30 million, a return on investment of nearly 4-to-1, the commission reported.

The report is worth perusing in its entirety.  The range of programming, from Signature Conferences to the History Mobile is impressive, but what stands out for me is the work being done on the local level that is being supported by the commission.  This is grass-roots commemoration at its best.  The Virginia commission is the closest we will come to a national commission.  In fact, it is hard to imagine a national commission doing much more that what Virginia has already accomplished.

While the entire commission ought to be congratulated I want to single out Cheryl Jackson.  Cheryl is the executive director of the commission and has been in charge from the beginning.  She is not a trained historian, but Cheryl has worked tirelessly to bring together top scholars, local leaders and other public officials to ensure that Virginia’s commemoration is relevant to all Virginians.  I can personally attest to her passion and commitment having seen her in action and talked with her in person.

If I had to pick 5 people who have done more to help shape our Civil War Sesquicentennial, Cheryl would be at the top of my list.

Next post: Beyond the Civil War and Reconstruction With Jonathan Holloway

Previous post: These Boots Were Made For Walking to Freedom