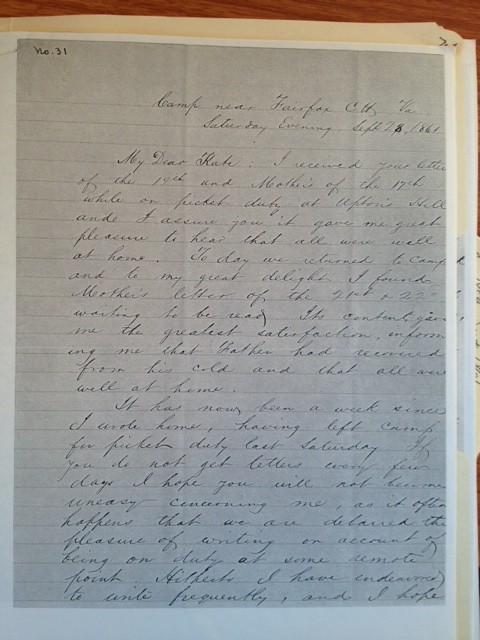 My recent work on camp servants has finally brought me back to the letters of John Christopher Winsmith, which I initially planned on editing for publication way back in 2006.  I came across this collection while researching the Crater book at the Museum of the Confederacy and was immediately struck by the content and the size of the collection. If I remember correctly, I spent the rest of the day reading about Winsmith.  John Coski suggested that I consider editing them for publication and a few weeks later I contacted him that I would take on the project.

Unfortunately, the Crater book and a few other things got in the way, but re-reading the letters has convinced me that now is the time to finish.  All 230 letters have been transcribed and I’ve started both editing and writing an introduction.  The letters are beautifully written and you simply cannot ask for more in terms of relevant content.  Winsmith writes detailed battlefield descriptions, but he also talks extensively about slavery, sacrifice, politics, and the challenges of command.

He falls squarely into what Pete Carmichael has dubbed “the last generation.”  Here are a few short passages.

The objections you have to going to Fla. will not apply to Va. besides I think it the duty of the whole South to make common cause against the hordes of abolitionists who are swarming Southwards. If they are successful against the border States, of course they will be upon us, and in order to prevent this we must annihilate them at the outset. (April 24, 1861)

I send you by this mail the last number of Frank Leslie which I hope may prove interesting. I got it this morning. The sketches are very good; but like most of Yankee things it is tainted with Lincolnism. (May 10, 1861)

Longstreet now planned and executed a dashing flank movement, moving forward his extreme right, and was driving the enemy in terrible confusion and with immense loss, when he was unfortunately wounded, though mistake, by a fire from a Virginia Regt.  Gen. Jenkins was killed by the same fire.  This occurred quite near our Brigade.  There was a pause and almost perfect stillness for a time.  Gen. Lee knew something was wrong.  In a few moments this Great Chief was among us, calm and noble, a quiet confidence resting upon his face.  I saw him then, and will never forget the scene.  Maj. Gen. Anderson now took command of our Corps, and on we moved through the Wilderness – formerly a coaling ground, and now densely covered for miles in all directions with a dense growth of small oaks.  The enemy had established a line of skirmishers, upon which we pressed hard: we then encountered their line of battle.  The 5th Regt on our left wavered, ours faltered.  The fire upon us was terrific.  Col. Hagood called upon me to act as Field officer and to rally the men of our Regt; many were falling back, others lying down.  My exposure was great, but I must do my duty, even if my life should be sacrificed. (May 15, 1864)

I have some idea of where I am going to submit the manuscript.  It’s going to be a pretty big book.  With that in mind I want to ask what you look for in a published primary source collection.  What kinds of editing practices do you look for in a book that is both readable and maintains the integrity of the original letters?

, which moves back and forth between commentary and extended passages from the letters.  I think that would be too much of a distraction as there is no reason not to allow Winsmith to tell his own story.  As far as the letters themselves, the only major decision I’ve made is to cut out passages that distract from the narrative.  I see no reason to hunt down every individual mentioned if it has no bearing on his war experience.  I realize that some may see this as problematic, but my primary goal is to ensure that the book offers an enjoyable reading experience.  Feel free to make the argument against it.

Beyond this I am all ears.  What suggestions do you have and/or what published edited letter collections would you have me read as a model?