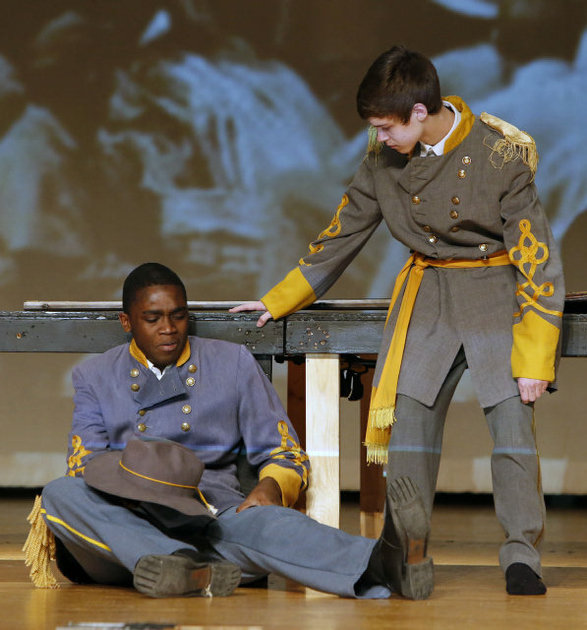 Looks like students at South Pointe High School are bringing to life the diary of Lt. Samuel “Catawba” Lowry, who served in the 17th South Carolina Infantry.  Lowry’s diary is well worth reading.  He provides a great deal of detail about camp life, battle, as well as his experiences with his servants.  His final diary entry comes just days before the battle of the Crater in which he was killed.  Lowry’s servant, Henry Avery recovered the body and escorted it home to Yorkville for burial.  On the one hand, I love projects like this.  Unfortunately, it looks like both teacher and students might be taking a bit too much license with the diary.

It is a story about Lowry’s home and his family – a story about his beloved Southland. Most of all, is a story about relationships and bonds of brotherhood.  It is also a story that some of the South Pointe cast members hope will challenge the stereotypes of the Civil War and slavery. Three of the essential voices in the play are Lowry family slaves: Horace, Jesse and Henry. They accompanied young Samuel to war. The diary never uses the word slave. Lowry refers to them as servants or boy.  It was Henry who descended into the crater, recovering Lowry’s body. Henry then found Lowry’s possessions – including the diary – and then brought Lowry home to Yorkville for burial.  South Pointe teacher James Chrismon and students such as junior Nicholas Arsenal turned the diary into a stage play. The play is not literal – some theatrical licenses were taken – but it stays true to Lowry’s beliefs and to his prose….

Anthony McCullough, one of two black students in the play, said the production “makes me realize that black people have come a long way.”  Arsenal said he hopes the play changes some perspective on slavery. “It wasn’t right, but not everyone was treated so badly.  “This play is about equality,” Arsenal continued. “Race doesn’t matter. Anyone can be your family,” he said.

Of course, it would be a mistake to blame students for characterizing the relationship between master and slave as one of equality.  Responsibility for this falls squarely on their teacher. This might be a good time to recommend one of Gilder-Lehrman’s summer Teacher Seminars.