Why Non-Slaveholders Will Fight For Slavery 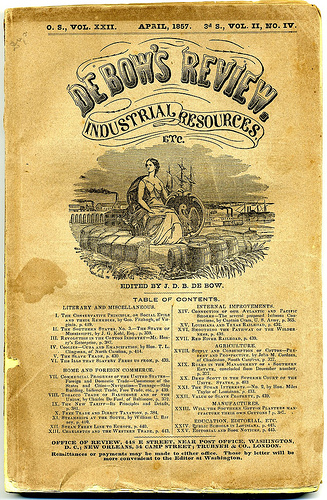 The comment thread following the last post reflects the difficulty of coming to terms with the way in which slavery united white slaveholders and non-slaveholders of the South by the end of the antebellum period.  It is commonly assumed that because the majority of white southerners did not own slaves they had no interest in maintaining their “peculiar institution”.  It is therefore a mistake to characterize the Confederate war as a war to defend slavery.

This is an argument that would have been soundly rejected by many white southerners, including Louisianan J.D.B. DeBow, who wrote the following in his Review in January 1861:

The fact being conceded, that there is a very large class of persons in the slaveholding States who have no direct ownership in slaves . . . I think it but easy to show that the interest of the poorest non-slaveholder among us is to make common cause with, and die in the last trenches, in defence of the slave property of his more favored neighbor…

I will proceed to present several general considerations, which must be found powerful enough to influence the non-slaveholder . . .

1. The non-slaveholder of the South is assured that the remuneration afforded by his labor, over and above the expense of living, is larger than that which is afforded by the same labor in the free States. . . .

2. The non-slaveholders, as a class, are not reduced by the necessity of our condition, as is the case in the free States, to find employment in crowded cities, and come into competition in close and sickly workshops and factories, with remorseless and untiring machinery. . . .

3. The non-slaveholder is not subjected to that competition with foreign pauper labor which has degraded the free labor of the North, and demoralized it to an extent which perhaps can never be estimated. . . .

4. The non-slaveholder of the South preserves the status of the white man, and is not regarded as an inferior or a dependant. He is not told that the Declaration of Independence, when it says that all men are born free and equal, refers to the negro equally with himself. It is not proposed to him that the free negro’s vote shall weigh equally with his own at the ballot-box, and that the little children of both colors shall be mixed in the classes and benches of the schoolhouse, and embrace each other filially in its outside sports. It never occurs to him that a white man could be degraded enough to boast in a public assembly, as was recently done in New-York, of having actually slept with a negro. And his patriotic ire would crush with a blow the free negro who would dare, in his presence, as is done in the free States, to characterize the father of the country as a “scoundrel.” No white man at the South serves another as a body-servant, to clean his boots, wait on his table, and perform the menial services of his household! His blood revolts against this, and his necessities never drive him to it. He is a companion and an equal. When in the employ of the slaveholder, or in intercourse with him, he enters his hall, and has a seat at his table. If a distinction exists, it is only that which education and refinement may give, and this is so courteously exhibited as scarcely to strike attention. The poor white laborer at the North is at the bottom of the social ladder, while his brother here has ascended several steps, and can look down upon those who are beneath him at an infinite remove!

5. The non-slaveholder knows that as soon as his savings will admit, he can become a slaveholder, and thus relieve his wife from the necessities of the kitchen and the laundry, and his children from the labors of the field. . . .

6. The large slaveholders and proprietors of the South begin life in great part as non-slaveholders. . . .

7. But, should such fortune not be in reserve for the non-slaveholder, he will understand that by honesty and industry it may be realized to his children. . . .

8. The sons of the non-slaveholder are and have always been among the leading and ruling spirits of the South, in industry as well as in politics. . . .

9. Without the institution of slavery the great staple products of the South would cease to be grown, and the immense annual results which are distributed among every class of the community, and which give life to every branch of industry, would cease.

10. If emancipation be brought about, as will, undoubtedly be the case, unless the encroachments of the fanatical majorities of the North are resisted now, the slaveholders, in the main, will escape the degrading equality which must result, by emigration, for which they have the means, by disposing of their personal chattels, while the non-slaveholders, without these resources, would be compelled to remain and endure the degradation. . . .

It would be a mistake to interpret this narrowly as the sole reason as to why soldiers fought.  As we all know, volunteers were motivated by a wide range of factors.  Rather, we should interpret DeBow and others as suggesting that slaveholders and non-slaveholders alike understood the consequences of defeat.