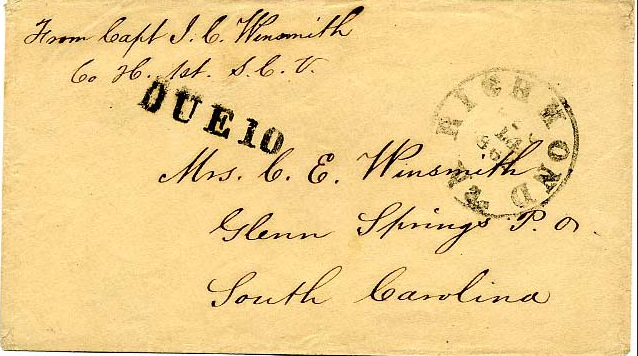 .” Throughout the war, Winsmith never wavered in his enthusiasm for the cause.  He believed that it was incumbent on everyone in the Confederacy to make the necessary sacrifices in the army and on the home front.  In letters that routinely characterized the Lincoln and the Yankee army as “invaders” and “abolitionists” it is clear that Winsmith viewed the struggle as a war to protect slavery.  Winsmith’s father, who served in the state legislature in 1860, introduced the following resolution immediately after Lincoln’s election to the presidency:

That this General Assembly is satisfied that Abram Lincoln has already been elected President of the United States, and that said election has been based upon principles of open and avowed hostility to the social organization and peculiar interests of the slave holding states of this Confederacy.

The father fully supported the war effort by purchasing Confederate bonds as well as his sons efforts to earn promotion.

Following the war both father and son supported the Republican Party.  The former testified in 1872 in front of a state committee about an incident on his plantation involving the Ku Klux Klan that left him severely wounded.  John Winsmith served for one year as a brigadier general in the South Carolina militia.  On October 17, 1876, Winsmith addressed a Republican rally in Spartanburg, SC.  Much of the speech constitutes an explicit rejection of principles and beliefs held by both father and son:

For four long and bloody years, on more than a score of battle fields, did I strive to strike down the flag of my country, but there it floats still, the star spangled banner, over the land of the free and the home of the brave, and I thank God that I am here today to declare to you, my countrymen, that never again will I essay to strike with uplifted hand that noble ensign of freedom. I thank God that I am here today to re-echo the words of that noble soldier General Robert E. Lee. Here are his words: “Secession is anarchy. If I owned the four million of slaves in the south, I would cheerfully emancipate them all to save the union.”

The congress of the confederate states declared that because of the election by the people of the United States “of a president and vice-president hostile to the south and her institutions the southern states withdrew from the union.” ” Her institutions,” in the plural, means of course the one institution of slavery, for the south was characterized by no other institution. Vice-President Stevens declared that slavery was a social, moral and political benefit, and that the southern confederacy was founded upon the corner stone of slavery.  The Saviour of the world, in his sermon on the mount, speaks of the foolish man who built his house upon the sand: “And the rain descended and the floods came, and the winds blew and beat upon that house, and it fell, and great was the fall of it.” The slaves in the southern states were held by a tenure of force…. When the southern confederacy was being founded upon that corner stone of slavery what was the opinion of the civilized world; what was the opinion of the fathers of our glorious republic in reference to it?

The next cause of our late war was states rights doctrine, that disjunctive doctrine according to which each portion of our country, called a state, is sovereign in the highest sense, allowing us no nationality, no country, and consequently no national government. The leading secessionists urged the strange idea that the state was superior to the general government, that a part was greater than the whole, overlooking the fact that the United States had rights too, and greater rights than any single state. A double allegiance would be a fearful problem for a conscientious citizen and worse than the allegiance of the feudal times, which was a graduated allegiance but not a double or multiplied one. We cannot faithfully serve two masters. The leading secessionists overlooked the fact that the constitution of the United States is a national work from beginning to end, conceived by the living national spirit of “one people” in spite of destructive provincialism.

Jealousy of the North:

The third cause of the war, says Dr. Lieber, was southern jealousy at northern progress — a fevering jealousy when it was perceived that civilization, number of population, the arts, education, the ships and trade, schools and churches, literature and law, manufactures, agriculture, inventions, wealth, comfort and power were rapidly finding their home at the north to the great disparagement of the south, weighted down by slavery, which nevertheless the south would not recognize as an evil. All periods of such developments or changes of power and influence from one portion of a country to another, or from one class to another, have been periods of heartburning, but in this case the vaunting pride of the receding or lagging portion forbade them to acknowledge the cause.

As you might imagine I don’t have any answers at this point.  I will have to dive back into the letters for clues, look at how the war impacted Spartanburg and the surrounding area as well as local politics toward the end of the war and into Reconstruction.  Looks like I’ve got a little puzzle to solve.