In the Name of Confederate Heritage 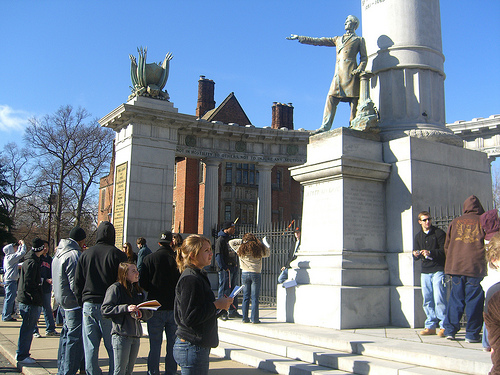 My students Interpreting the Jefferson Davis Monument in Richmond

Barring any major development I think it’s time to move beyond this story involving the Virginia Flaggers and their unsubstantiated account of monument vandalism. Some of you are no doubt pleased to hear this. On the face of it this story has about as much value as a soap opera and accomplishes little more than attracting a large number of visitors to the blog. There is certainly a place for such entertainment.

That said, it does reflect a certain narrative thread of recent Civil War memory. Regardless of its origin, both the content of this story and Susan Hathaway’s embrace of it is evidence of this relatively small community’s collective belief that their heritage and beliefs are under assault. What better way of rallying the troops than a story involving one of their own or someone closely identified with the Flaggers defending one of the most important and even sacred sites on Richmond’s Monument Avenue. I don’t anticipate any public explanation on the part of Hathaway and/or Rob Walker Jr. That their community has remained quiet is telling enough. There will be no public demands for an explanation from this community. To do so would be a sign of weakness in the face of this ubiquitous enemy.

Move on people. There is nothing more to see here.

It won’t be long before the colors are raised and calls to “Restore the Honor” are heard on the Boulevard in front of the VMFA.

Next post: An Important Work of Civil War Memory

Previous post: Susan Hathaway, Rob Walker Jr. and the Virginia Flaggers Have Some Explaining To Do