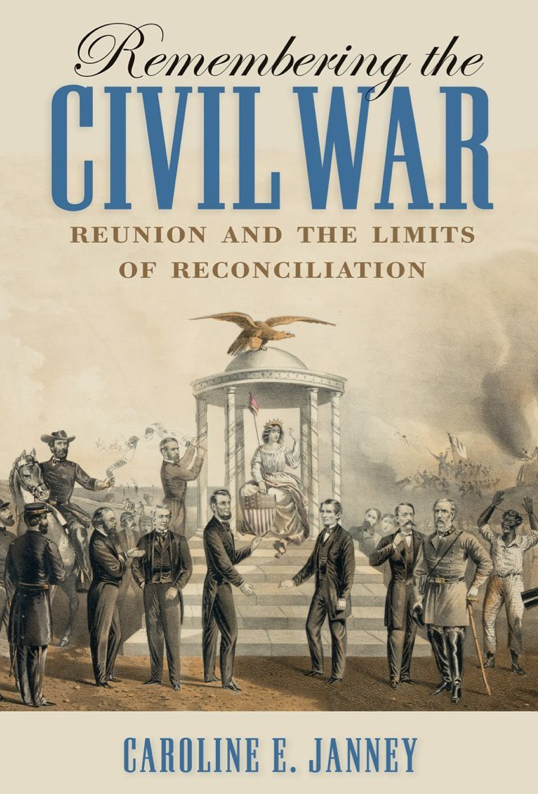 (University of North Carolina Press, 2013) arrived this past Saturday.  You should be able to pick it up in a few weeks.  I usually wait until I have four or five new books before listing them, but given the focus of this book I wanted to single it out.  This title is the latest release in the Littlefield History of the Civil War Era, which is edited by Gary Gallagher and T. Michael Parrish.  I’ve been looking forward to it for a couple of years now.  The few times I was able to talk shop with Carrie definitely helped as I was researching my own book as did a number of her journal articles published along the way.

It should come as no surprise that I’ve pushed practically everything aside to make room for this one.  Remembering the Civil War promises to be the most comprehensive treatment of Civil War memory since the publication of Blight’s Race and Reunion: The Civil War in American Memory

At the same time Carrie has set out to refocus scholars on a number of interpretive points that she and a small, but growing number of scholars have emphasized in recent years.

By arguing that the divisive issues of the war such as slavery and emancipation were forgotten in the name of white supremacy, both popular culture and scholars have suggested that white northerners eventually capitulated to the Confederate memory.  The Lost Cause, this line of thinking goes, projected  a rhetoric and imagery of battlefield bravery and valor that the North came to embrace.  This formulation, however, overlooks two key facts.  First, Union veterans could embrace both reconciliation and emancipation.  One did not preclude the other. Second, in order for reunion-the Union Cause-to triumph, the victorious North had to welcome white southerners back into the national fold.  But Union veterans never forgot that they had fought against treason. Union soldiers did not “sell out” to Confederate memories. Instead, they maintained their own distinctly northern version of the Civil War in which preservation of the Union-and in many cases emancipation-remained integral to northern memories of the war well into the twentieth century (just as Confederates continued to rant about barbaric and heartless Yankees). Former enemies might come together for battlefield dedications where they remained silent on the divisive issues, but beyond these occasions, Union and Confederate veterans tended to maintain that their cause was the virtuous one. [p. 9]

Without saying so explicitly, Carrie is commenting on the influence that Blight’s thesis has had over the past ten years on both scholars and the broader public.  It’s as well argued a thesis as you will find, but it is also a comforting framework in a nation that has attempted to come to terms with its collective moral responsibility for its past.  I suspect that it is rare for a scholarly work such as Blight’s to enjoy such a popular reception beyond the halls of academe.  Much of what I’ve written on this blog and for publication, including my book, has been influenced heavily by Race and Reunion.

Whether Carrie can chip away at this has yet to be seen, but for now that doesn’t matter much to me. I am looking forward to spending many more hours with the work of a top-notch scholar and friend.