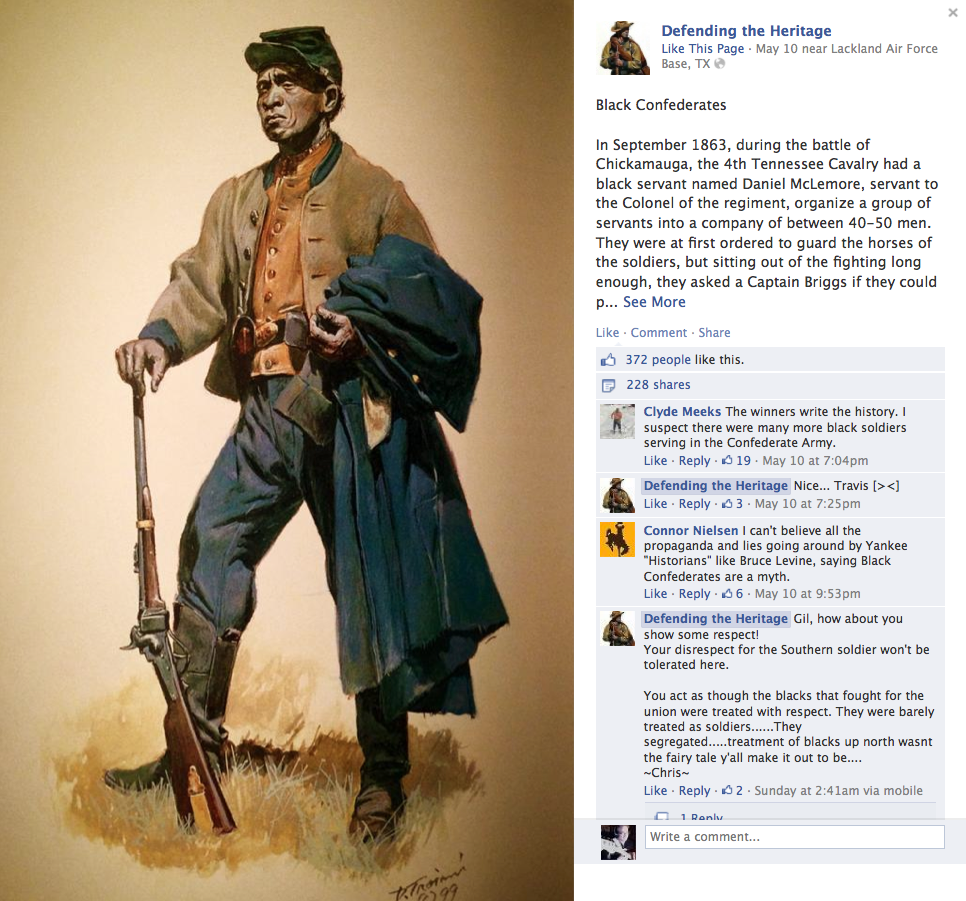 I do enjoy perusing the Confederate Heritage Facebook pages.  The topic of black Confederates is a favorite among these folks. Many of the images and other references are new to me, but more importantly their handling of this “evidence” serves as a reminder of just how incapable some people are in applying even the most rudimentary skills of interpretation.  Instead, as can be seen in the comments section, these postings do little more than offer reassurance to the true believers and reinforce a strict us v. them mentality.

I am surprised that I have not come across this particular image by Civil War artist Don Troiani.  Most of you know that over the years I’ve owned a number of his prints, including a giclee edition of “Mahone’s Charge” which I used as the cover art for my book.  A few months ago I learned that Troiani painted a USCT.  This particular image is included in Don Troiani’s Regiments & Uniforms of the Civil War

on p. 208.  It depicts what Troiani calls a “Black Trooper” in the 4th Tennessee Cavalry at Chickamauga in September 1863.

The narrative that accompanies Troiani’s image is somewhat confused as you can see, but it is his reference to the actions of roughly 40 “regimental servants” during the battle that is of interest.  Daniel McLemore, who happened to be the servant of the regiment’s colonel, apparently led these men into battle with the rest of the unit.  Troiani lists two references for this story, one which is a National Archives Records Group along with one Kelly Barrow’s problematic books

.  I don’t have access to the National Archives source and the Barrow book only lists a postwar source from a newspaper dated 1885.

Troiani clearly has little interest in the history beyond the fact that these men were known for dressing and outfitting themselves with discarded Yankee clothing and equipment. It’s an interesting subject for Troiani to paint. That the story is remembered as early as 1885 is interesting, but I would love to locate some wartime evidence that supports the story. I’ve heard of other examples of small numbers of servants entering battles, but nothing along the lines outlined here. It will certainly enrich the story that I am currently exploring.  Do any of you know anything more about the 4th Tennessee Cavalry and specifically their involvement at Chickamauga? Please refrain from sending me things like this. 🙂

In the meantime, I think I found the perfect image to use for the cover art of my next book.