Edward Sebesta Thinks I am a White Nationalist 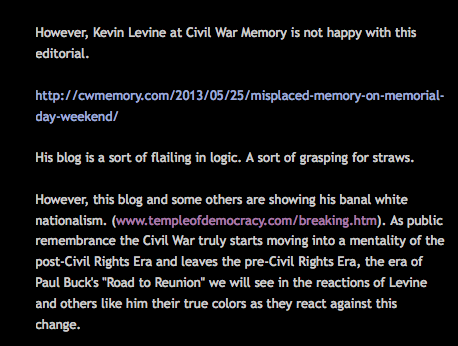 Today is quickly turning into another whacky day in the blogosphere. My WordPress dashboard showed a link from Edward Sebesta’s Anti-Neo-Confederate blog. When I clicked over I was shocked to find that I am referred to as a “white nationalist.” Imagine my surprise. Apparently, Ed is not happy with my recent post in response to Jamie Malanowski’s editorial on the changing of the names of military bases.

First, he can’t even spell my last name correctly, but how he arrives at white nationalist based on this post is anyone’s guess. I’ve been called plenty of things over the years, but this is the first time that I’ve been referred to as a white nationalist.

Sebesta is, indeed, a strange character. This leaves me to wonder whether the guy has a few screws loose.