It Is Well That War Is So Terrible (Water Balloon Style) 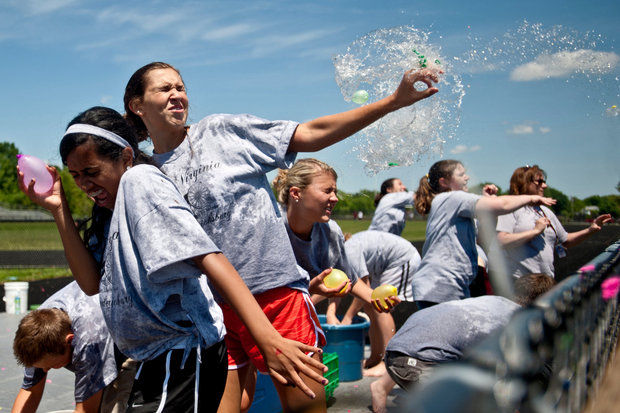 I do my best on this blog to highlight the innovative work being done day in and day out by history teachers across the country, but there is absolutely no excuse for this activity. Hey, I have no problem if you want to end the year with a water balloon fight, but why anyone would frame it as a Civil War battlefield simulation is beyond me.  Welcome to what Parkside history teacher Robert Riedel thinks is a serious exercise that is intended to give students a sense of what a Civil War battle (in this case, the battle of Fredericksburg) was like.

Students were split into Confederates and Union members. About 20 students who were part of the Confederate group were behind a fence, blocking the assault of the Union members. The remaining students were split into four groups of Union soldiers and led into the field by Riedel and fellow eighth-grade teachers Sharon Schneider and Courtney Forner.

Riedel said he has hosted this activity for the past nine years because he feels it is a unique way for students to think about the fears and confusion soldiers experience during war.

“It’s intimidating when you get out there and there are 40 balloons flying at your head,” Riedel said. “(The activity) helps students realize how hard and intimidating it was for Union soldiers to take hits.”

Each Union group took several turns throwing water balloons at the Confederate side – getting progressively wetter as the hour progressed. The Confederate side was armed with the majority of the 3,000 balloons, which were filled by the students on their own time.

The students learned about the Civil War in class in March, and Riedel said he believes events like this help illustrate battles that are ancient in the minds of eighth-graders. While many students can learn material through reading and lecture, Riedel said most students are “multilevel learners” and learn best by physically acting.

It isn’t simply that the activity itself is useless as a historical exercise.  What I find troubling is just how disrespectful it is to the men on both sides who experienced the horrors of battle and to those who died as a result. This is a nation that has been at war for over ten years.  We would do well to try to impart to our students what that means for the men and women who experience battle, the challenges they face afterwards and the sacrifices made by their families.  This does nothing more than trivialize violence.

Dear Mr. Reidel, next time try bringing in a veteran of the Iraq or Afghanistan War to talk to your students about the “fears and confusions soldiers experience during war.” My guess is that it will leave them with a more meaningful experience even if it doesn’t involve so much fun.