A Few Parting Shots at the Gettysburg 150th 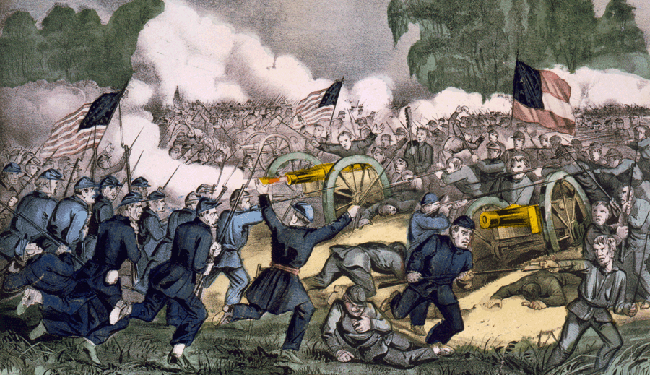 First, I wanted to thank all of my friends and other acquaintances for the continuous stream of posts, tweets, videos, etc. from Gettysburg. Although I was just there last week it was hard not to feel just a bit left out of all the excitement that has transpired over the past few days. Reading your thoughts and looking at your photographs was the next best thing to being there. I also wanted to take the opportunity to thank all the employees of the National Park Service at Gettysburg for their hard work. I know many of the Park Service staff at Gettysburg and can speak firsthand to their dedication to making this event both educational and meaningful.

There is a lot I could say about the past three days and perhaps I will at some point, but for now a very straightforward observation. Apart from a few exceptions I came across next to nothing that smacked of the typical Lost Cause rhetoric. In terms of battlefield interpretation we have the NPS to thank for that. News coverage was decidedly focused on the sacrifice of the soldiers who fought the battle and when it came to drawing meaning from the battle most people, not surprisingly, gravitated to Lincoln’s Gettysburg Address. Granted, not everyone arrived at the same meaning and in the case of Doris Kearns Goodwin I would suggest she went off the deep end in her framing of the battle’s significance.

The dominant themes were Union and Emancipation. I’ve said before that we have probably gone too far in highlighting emancipation, which decidedly reflects our own preoccupation. I can live with that. What we didn’t get, apart from a silly interview with R.E. Lee, was any attempt to use the occasion to debate secession and the 10th Amendment. We didn’t hear from the fringes of the heritage community who are still fighting the Civil War. There were plenty of Confederate flags on display, but no Virginia Flaggers.

In the end, I suspect that most people view this battle and the Civil War as a whole as Americans first. Regardless of what political differences divide us by region and political party, walking battlefields and listening to stories at places like Gettysburg reminds us of our shared history and heritage. I feel confident in asserting that the overwhelming number of Americans believe that the sacrifice of the soldiers on the battlefield, the preservation of the Union and emancipation ultimately made this a stronger nation. Of course, I am glossing over a great deal, but there is something worth acknowledging and even embracing at such heights.

I can only imagine the crowds that will congregate around the “copse of trees” along Cemetery Ridge and the fields along Seminary Ridge later this afternoon. It’s going to be an exciting moment for the thousands of participants and witnesses. Regardless of background it is likely that many will wander off into the world of Faulkner’s 14 year old Southern boy. I found myself in that world for a few brief moments last week as I walked the route of Pickett’s men from in front of Spangler’s Woods. When they return from that distant place, however, I suspect that the vast majority will (regardless of whether it is conscious or not) breathe a sigh of relief that the assault did not succeed.

In other words, most people will leave Gettysburg firm in their belief that the right side won the battle and the war. This is not to say that the experience is meant to somehow cleanse this nation of its sins or overshadow what currently divides us. The “unfinished work” of perfecting this Union has always been our responsibility. From a distance of 150 years how could it be otherwise?

That’s it for now. By the time most of you read this I will be off to Montreal for a little rest and relaxation and a lot of good jazz.