United Daughters of the Confederacy in Boston? 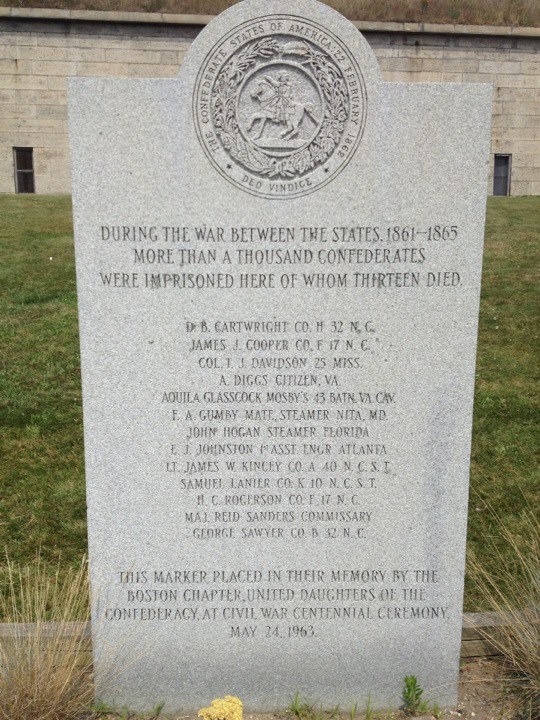 Today my wife and I spent the day on Georges Island in Boston harbor. I gave a brief presentation for the National Park Service on Boston’s Civil War memory, which went really well. Afterwards, we spent some time walking through Fort Warren.

I knew all of this, but what truly surprised was this monument to those Confederates who died as prisoners, which was dedicated by the Boston chapter of the United Daughters of the Confederacy in 1963. Yeah, that’s right, there was a UDC chapter in Boston.

Apparently, the push for a monument to Confederate dead at Fort Warren goes back at least to the 1930s.

I did a little snooping online and came up with the following references to the Boston chapter from the minutes of twenty-fourth annual convention (1917) in Chattanooga. Seems like there might be an interesting story here about how the ladies fared in the center of abolitionism.

Madam President General and Daughters of the Confederacy:

Massachusetts sends hearty greetings to her sisters assembled in Chattanooga. My plans were all made to meet with you in person, but circumstances in my home have prevented.

The Boston Chapter is showing her true patriotism in the present crisis, for our hearts are large enough to take on more loving sacrifice, while at the same time we prove loyal to the memory of our “Heroes in Gray.”

Our Chapter was among the first to subscribe for a Liberty Bond, and each member is actively engaged in Red Cross work. Besides sewing and knitting, we liavc a tempting collection of home canned delicacies waiting to be given our sick and wounded soldiers who return to us from across the water. Within the past week our Chapter has given small sums to the War Community Fund and to the War Y. M. C. A.

During the past winter it was our privilege to be able to give to the Ann Lee Memorial Home, $25.00, and to the Jefferson Davis Monument, $25.00. We sent $25.00 to some needy Veterans, and also gave $25.00 to the Relief Fund. Through the generosity of one of our members half a scholarship was given a worthy young lady in a normal college.

In May it was our rare privilege to have as our guest Miss Mildred Rutherford, of Georgia, former Historian General. She charmed a large Boston audience with her “South of Yesterday.” She was something new to Boston, and we gained some new friends through the publicity given her being here.

At the last meeting a committee was appointed to call on Governor McCall of Massachusetts, to beseech him to use his influence towards prohibiting the military bands -in Massachusetts playing “Marching Through Georgia” as a national march at the present time. There are thousands of Southern boys in and around Boston at the different training stations who are as true and patriotic as men can be, and yet they are compelled almost every day to march to a song whose words are an insult and a constant reminder of that disgraceful March to the Sea.

Cannot we as an organization make a plea to our nation to be at least courteous enough not to play it, as we are all standing together today behind our great President and fighting for humanity Assuring you that the Boston Chapter stands ready to help in any undertaking, and hoping with you that the dark cloud which hangs over our fair country will soon be lifted.

Leave a Reply to Will HickoxCancel reply