A Forgotten Battle For the Second Amendment 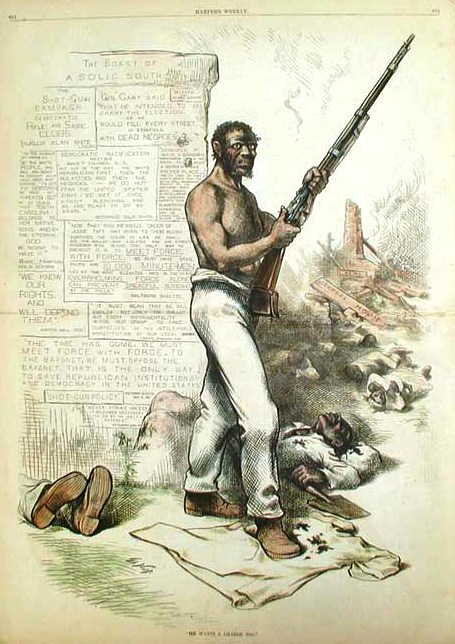 One of the most interesting sections of Carole Emberton’s new book, Beyond Redemption, is her analysis of the relationship between gun ownership among newly-freed slaves, voting, citizenship and violence in the postwar South. By 1860 service in the military had already expanded the suffrage to include a large percentage of white men. The right to vote, achieved through military service defined what it meant to lay claim to citizenship in the United States. The defense of home and nation not only opened the doors to voting for many white men, but the weapons used proved to be extremely useful in the often violent world of political campaigns and gatherings on election day.

It should come as no surprise, then, that the claims to citizenship and the vote by a formerly enslaved population rested directly on the right to bear arms. Former black Union soldiers often purchased their weapons upon leaving the army while many others purchased weapons with what little money they earned. They did so to protect themselves, but also as symbols of freedom and independence. The right to own a weapon constituted a tangible break with a past in which masters controlled the conditions in which their slaves could shoulder a gun. Most importantly, gun ownership was understood as a direct claim through the Second Amendment to the rights of citizenship and the vote.

Of course, gun ownership among former slaves was seen as a direct threat to a society structured around white supremacy as well as a constant reminder of Confederate defeat. Many whites feared widespread violence and revolution from their once “loyal slaves” as they did during the antebellum years. Not surprisingly, whites took steps to disarm blacks.

Southern blacks fought against whites’ efforts to disarm them by claiming a right to bear arms as citizens of the United States. Delegates to the black state convention in Charleston, South Carolina, petitioned Congress to ensure the rights of citizenship for freedpeople, including the security of “life and property” schools access to land, “equal suffrage,” the right to sit on juries, and “the right to keep and bear arms” as guaranteed by the “Supreme law of the land.” Citing the Second Amendment, the convention decried a recent law passed by the state legislature outlawing black gun ownership as a “plain violation of the Constitution” and “unjust to many of us…who have been soldiers, and purchased our muskets from the United States Government when we mustered out of service.” Before claiming their right to bear arms, however, the convention appealed to the power of the United States, “the strong arm of the law and order,” to protect them. By doing so, they acknowledged not only the authority of the federal government but also its duty to them. Yet their subsequent invocation of the Second Amendment recognized the limits of state authority if not its obligation, which still might be fulfilled by securing for blacks the right to “keep and bear arms.” Likewise, the Loyal Georgian, a black newspaper published in Augusta, proclaimed the right to bear arms in self-defense a right of American citizenship to which blacks were now entitled. These petitions reveal that Southern blacks understood arms bearing and other citizenship rights, including voting, as mutually dependent; that is, without the ability to defend themselves against violence, then the other rights would be of little practical value. (p. 150)

What is interesting about Emberton’s analysis – if I understand it correctly –  is that that white Northerners (including Republicans) harbored some of the same fears about black gun ownership minus the concerns about revolution. Republicans found themselves in a difficult position as they anticipated that gun ownership would likely lead to continued violence even if they understood that those same weapons guaranteed a vote for their party. Beyond the Republican Party, however, many Northerners resisted the claims to citizenship and full rights that were now being asserted at the end of a barrel. It is what ultimately derailed their claims to citizenship.

It is interesting that this battle has been lost among those who wrap themselves in the Second Amendment. In this case the defenders of the right to bear arms were appealing to the federal government to counter the encroachment of the state on their rights. Today the most extreme Second Amendment advocates harbor what most reasonable people view as an irrational fear that the federal government is going to take away their guns.

Still, you would think that the vigilance on the part of African Americans, who demanded their right to bear arms during such a precarious time, would be front and center in their rhetoric about the consequences of losing such an important mark of citizenship.

Previous post: A Black Confederate We Can All Live With