Is This An Appropriate Use of the Confederate Flag? 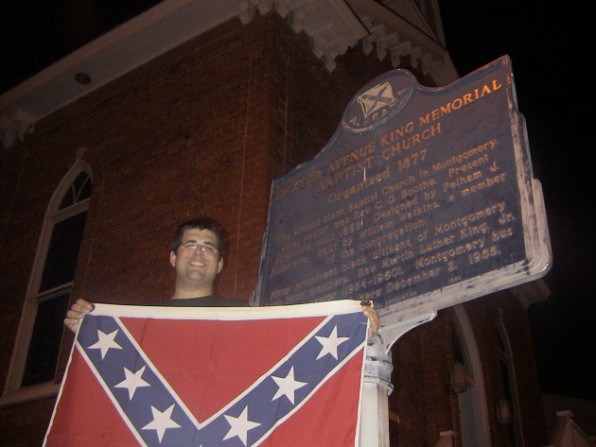 Susan Hathaway and the Virginia Flaggers are Richmond’s self-described defenders of Confederate heritage. At the center of their advocacy is the belief that the Confederate flag has been hijacked by individuals and groups who have used it for purposes other than to honor their Confederate ancestors. This belief is at the center of their ongoing protest at the Virginia Museum of Fine Arts and recently in front of the Museum of the Confederacy – Appomattox, owing to the latter’s failure to fly a Confederate battle flag on the walkway leading to the entrance. They would have their fellow Richmonders believe that the meaning behind the planned placement of a large Confederate flag along I-95 in late September is solely about honoring the soldier. Not so fast.

The Virginia Flaggers believe they have established for themselves a high standard for the proper use of the Confederate flag. But when it comes time to defending choices about their own use of the Confederate flag they are silent. The photograph above shows Matthew Heimbach “flagging” the Dexter Avenue Baptist Church in Montgomery, Alabama. As yesterday’s post showed, Heimbach has marched front and center with the Virginia Flaggers on at least one occasion and, last night Flagger spokesman, Tripp Lewis, claimed him as a member.

This raises a very simple question that the Richmond community deserves to have answered. Does Heimbach’s actions in front of the church made famous by Dr. Martin Luther King represent the values of the Virginia Flaggers? In other words, is this an appropriate place to “flag”? Is this an example of honoring one’s Confederate ancestors or Confederate heritage? If so, how? I can’t help but see this as an example of what the Flaggers themselves have referred to as an inappropriate use of the flag, but perhaps I am missing something.

What exactly is Heimbach’s role in the Virginia Flaggers? Has he personally given money to or helped raise money for the I-95 flag project? Finally, does Susan Hathaway herself claim Heimbach as a member or even as a friend of their cause. If the Virginia Flaggers hope for even a modicum level of support in their community than they should be forthcoming in response to what are some very simple questions.

Next post: Staking Out a Position on the Confederate Flag