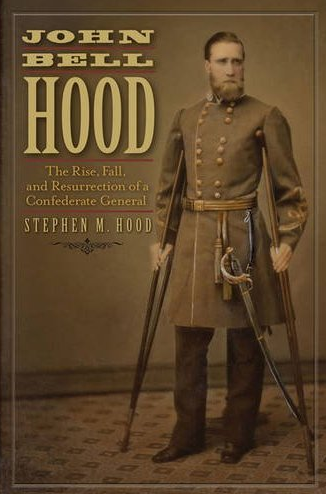 Ted Savas is having a field day marketing his new book about John Bell Hood by author Stephen Hood. He has gone out of his way to emphasize how the book breaks new ground, specifically in reference to the popular claim that Hood was both an alcoholic and drug addict. In one of his latest posts he takes author Allen Guelzo to task for casually referencing this little piece of Hood lore in his new book about Gettysburg. I will let Savas take it from here.

General Hood did not sustain himself or even use alcohol or opiates as Sword and others continue to endlessly prevaricate about, and historians who should know better copy without curiosity or question.  Stephen Hood’s John Bell Hood: The Rise, Fall, and Resurrection of a Confederate General

(2013) unhorses these (and other) untruths and buries them under a flurry of stomping hooves. He does this in two ways: with newly found original firsthand sources, and a simple if time-consuming comparison of the “sources” originally used by Sword and others to characterize Hood as a drunk, crippled, drugged, hack of a leader.

This new book conclusively demonstrates that, even WITHOUT these newly discovered documents, the sources used by Sword and others were all hearsay or misread or intentionally misused (readers can decide, and the plentiful reviews on Amazon and elsewhere demonstrate that they are shocked by the mountain of evidence). The record is one secondary slander built upon another, piled upon a third, each with its own new purple adjectives thrown in for good measure. If Stephen Hood had left this subject alone, there is no doubt some author would have soon described an inebriated General Hood selling crack and meth in an Atlanta ghetto during leave.

The Civil War is filled with little stories that are told and re-told often with little attention to whether there is sufficient evidence. I’ve fallen into that trap on numerous occasions and I suspect that many of you have done so as well. Most historians welcome being corrected. Here’s the problem. Savas seems to be on some kind of crusade with this particular title as if it alone offers the necessary corrective regarding Hood’s drug and alcohol use. Not so fast; in fact, Stephen Hood is fairly late to the game.

(University of Tennessee Press). The book offers a thorough overview of Hood historiography, including an analysis of claims made about Hood’s supposed drug and alcohol abuse.

Another dominant myth swirls around Hood’s life-threatening injuries and how they may have altered his psychological makeup in a significant manner. In order to deal with the physical and emotional trauma, some historians have suggested that Hood drank liquor to the point of intoxication and used drugs, specifically laudanum, to cope with his wounds from Chickamauga and Gettysburg, which relieved pain but supposedly clouded Hood’s judgment. Once more, rumors supplant facts, and no documentation is offered to prove Hood ever drank or abused drugs during the war. The rumor of substance abuse began with an undocumented assertion in 1940 and has continued to be reiterated time and time again in the wide range of Civil War scholarship.

If Hood had been under the influence of narcotics, why did his contemporaries fail to mention it? Mary Chesnut and Jefferson Davis, who left a wealth of postwar interpretations about the war and their interactions with Hood, never mentioned any drug usage or excessive alcohol consumption that may have impaired judgment. Hood’s personal surgeon’s records are unavailable, leaving the idea of laudanum use as nothing more than a fabricated offering to explain defeat. Some artificial limbs arrived from Europe with a bottle of laudanum encased with the limb; yet, no sources have emerged to argue if Hood’s artificial leg came with laudanum and no documents indicate Hood took the drug if he had access. These are a set of allegations that have been passed through the historiography without careful examination or foundation and need to cease until evidence surfaces. (xx)

Regarding Hood’s performance at Spring Hill.

Any analysis that bases failure at Spring Hill on alcohol and drug usage is problematic, particularly with the limited amount of evidence. Though it is documented that drinking took place among the officers, there are no specific references to Hood being drunk. Furthermore, there are no sources indicating that Hood had taken any painkillers to alleviate the constant pain from his injuries. Thus, until evidence appears directly indicating that Hood had been drunk or under the influence of narcotics, they cannot be included in the analysis of why the Army of Tennessee failed at Spring Hill. (153)

The remarkable thing about Miller’s analysis is that he doesn’t make any attempt to challenge the motives of other historians who have asserted the addiction narrative. He allows his argument to do the work. If Stephen Hood’s book helps to correct this particular aspect of the history than more power to it, but let’s move beyond this nonsense about how it is the first to do so.

Finally, I assume that Miller’s book is cited in Hood’s study on this particular issue given its place in the historiography. Later today I may comment on chapter 11 of the book, which Savas has made available online.

Next post: Are the Virginia Flaggers A Threat to Confederate Heritage?