Former Slaves in the Spotlight, but With No Vote 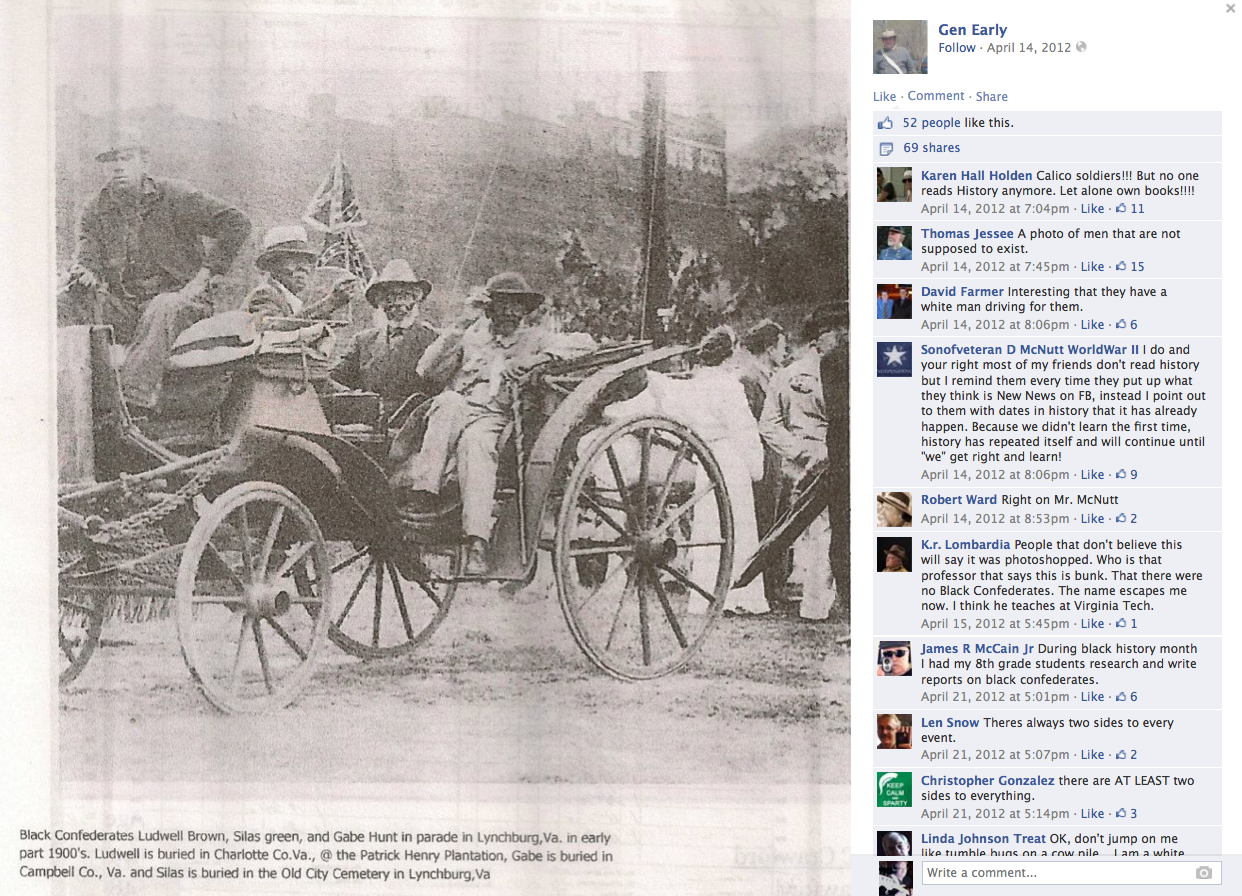 This morning I was perusing some of my favorite Facebook pages when I came across this gem of a photograph. The image of three elderly black men waving Confederate flags is accompanied by the standard comments from the Southern Heritage crowd. It’s not particularly interesting given the number of photographs that clearly point to the presence of black men at Confederate veteran reunions and other public events throughout the postwar period.

In this case, however, we have an account written in 1937 by Lucy Williams about one of the individuals in the image, who went by the name, “Uncle Lud Brown.” In the hands of southern whites following the war Ludwell Brown became another former slave, who “feels no bitterness” over having been owned. We should also not be surprised to learn that Brown was a former slave who performed various duties in the Confederate army. It’s not clear who he was attached to, but the evidence points to a role as a body servant or impressed slave. Surprisingly, Williams also comments on Brown’s participation in the parade.

Uncle Lud says one of his happiest experiences occurred recently, when he was asked to attend the sesquicentennial in Lynchburg. He was taken by some of his white friends to Lynchburg, and there joined two other Confederate soldiers, Silas Green of Lynchburg and Gabe Hunt of Rustburg. The three were asked to ride in the parade and were placed in a Victoria belonging to the Guggenheimer family and drawn by two handsome bay horses. The three were given Confederate flags and they proudly waved these flags as the line of march proceeded.

After receiving much attention during the day from both white and colored people, the day was declared to have been one of the happiest, and Uncle Lud returned to Brookneal and to his work where he is seen daily, rain or shine, with his horse and buggy still in the service of Uncle Sam.

Lynchburg was founded in 1757, which places the year of the parade described in this passage as 1907. The date provides a bit of context in which to interpret this image. A few years earlier, Virginia revised its state constitution that left the vast majority of the state’s black population disfranchised. This followed a period of intense black political action stemming from the success of the Readjuster Party in the early 1880s. Parading three former “loyal” slaves around with Confederate flags reinforced the Lost Cause narrative of the white South and encouraged peaceful race relations at the height of the Jim Crow Era.

Note: For those of you in the Boston area I will be speaking on the topic of the myth of the black Confederate soldier on Monday November 4 at 7pm at the Nevins Memorial Library in Methuen. Come on out.

Next post: “With a Rebel Yell, She Cried More, More, More…”