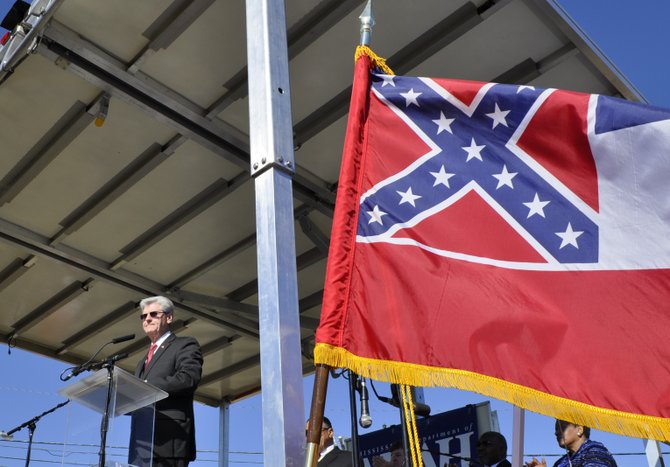 It’s an overused reference that often waters down the complexity of the history that it hopes to render intelligible. In this case, however, it seems appropriate. Last week the state of Mississippi broke ground on a new Civil Rights museum that should be open in about four years.  The photograph above shows Governor Phi Bryant presiding over the ceremony alongside the Mississippi state flag. We can debate to what extent project represents progress on various fronts from race relations to memory, but for now I will leave you with a bit of context.

Our position is thoroughly identified with the institution of slavery—the greatest material interest of the world. Its labor supplies the product, which constitutes by far the largest and most important portions of commerce of the earth. These products are peculiar to the climate verging on the tropical regions, and by an imperious law of nature, none but the black race can bear exposure to the tropical sun.

These products have become necessities of the world, and a blow at slavery is a blow at commerce and civilization. That blow has been long aimed at the institution, and was at the point of reaching its consummation. There was no choice left us but submission to the mandates of abolition, or a dissolution of the Union, whose principles had been subverted to work out our ruin.

Previous post: Where Will President Obama Be on November 19?