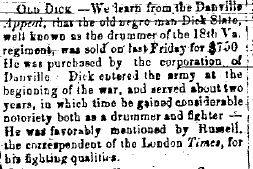 First, I want to thank Robert Moore for passing along this little gem, which he found in the Staunton Vindicator (12/11/1863). After searching for additional information about the source I realized that another reader had passed it along back in 2011.

There are several pages of compiled records for Dick Slate with the 18th Virginia Infantry at Footnote, designating him simply as “drummer,” no rank given. He’s listed on “Field and Staff” rolls, with no specifics on formal enlistment or discharge. Men like like Dick Slate really seem to be betwixt-and-between in terms of their military status. Bill Yopp, for example, is now remembered (as designated on his headstone) as a drummer, although Bell Irvin Wiley, who actually met him, is very explicit that he was a body servant. Presumably he actually served both roles.

There was special measure during the war where the CS Congress authorized pay for slaves employed as musicians. This was, I suspect, a belated recognition that men were bringing their slaves along with them and employing them as musicians (e.g., Captain Thomas Yopp and Bill Yopp). Not clear to me that this pay went directly to the slave; as in other cases it may have gone to the master, who may or may not have passed it along.

Without clear documentation of formal enlistment or discharge, I wonder what official status Dick Slate actually had within his regiment, or if he was only carried on the rolls as a drummer at his master’s pleasure — which would be an entirely different sort of status than a soldier who was enlisted for a specific term — one year, three years, for the duration, which could not be broken without a formal process and review.

Quite a few of the men now identified as BCS were musicians — Bill Yopp, Henry Brown, Dick Slate — so the actual, official status of these men within the army is relevant to the discussion. Generally speaking, the laws passed by the CS Congress differentiate between non-commissioned officers, privates and musicians — implicitly identifying the latter as distinct and separate from the first two — but (for me at least) it remains a very confusing story that bears further digging.

Andy is likely spot on with his analysis of the available evidence. The Confederate Heritage crowd loves pointing to musicians as examples of loyal service among black Southerners. One wonders, however, how the sale of Dick Slate fits into this comforting picture.

Next post: Ed Ayers Tells the Story of Richmond at TEDxRVA