Interpreting the White Scapegoating of the 4th Division at the Crater 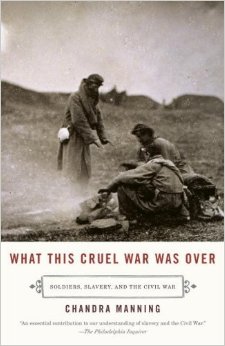 I am a big fan of Chandra Manning’s book, What This Cruel War Was Over: Soldiers, Slavery, and the Civil War. It’s an incredibly thought-provoking book and especially helpful when it comes to understanding how Confederates conceptualized the importance of slavery throughout the war. However, I am less convinced by her analysis of how the bitter fighting in the spring and summer of 1864 effected the attitudes of Northern soldiers regarding slavery and civil rights.

While I agree with Manning that by the summer of 1863 many of the men in the ranks accepted the necessity of ending slavery for the sake of the war effort and the Union she goes on to argue that these men had also been inspired to “consider more thoughtfully their own obligations to overcome  racial prejudice and promote at least some basic rights for black Americans…” (153). By 1864, according to Manning, military setbacks and other problems caused these men to “back away” from “a world of increasing racial equality and black rights.”

First, I just don’t see Union soldiers as preoccupied with questions of civil rights during the war. With few exceptions, they finished the war with the same racial attitudes that they went in with, though we do need to acknowledge the effect that experiencing slavery firsthand had on their overall acknowledgment that its demise was necessary for both military and moral reasons, and as necessary to bring about a stronger union.

Second, I have trouble with the assumption that we can track the overall ebb and flow of racial attitudes in the ranks from looking at their letters and diaries. Manning suggests that “scapegoating” black Union soldiers for their performance on the battlefield tells us something salient about these attitudes. She points to the Crater as one obvious example. There was indeed a great deal of scapegoating following the debacle at the Crater, but I think we should be cautious when it comes to drawing conclusions about what they tell us about racial attitudes overall and, more specifically, about white perceptions of black soldiers.

Numerous accounts of the battle written by Union soldiers, who were present on the Crater battlefield or who heard the news second hand, pointed blame at the men in Brig. Gen. Edward Ferrero’s Fourth Division. These men “skedaddled” and “panicked” in the face of William Mahone’s counterattack, though just about every account fails to acknowledge that these same men managed to advance to the most forward positions, along with scattered white units. Regardless, many, in fact, did observe a confused retreat by the black soldiers after being slammed by Mahone’s Virginians. Their retreat did add to the confusion in and around the Crater. My point is not to direct blame solely on the Fourth Division, but to make the obvious point that assigning blame to these men ought not to be necessarily interpreted along racial lines.

Many men who blamed the black soldiers also went after the officers from division command all the way up to Generals Meade and Grant. We would do well to remember that for most of the men in the Army of the Potomac this was their first experience fighting alongside African-American soldiers. It’s not as if we have the benefit of tracking responses to black soldiers over many battles, though the black units in the Army of the James who took part in the initial assaults on Petersburg in mid-June received some positive press.

By the end of July 1864 the men in the Army of the Potomac had fought through the bloody battlefields of Virginia, experienced the hardships and monotony of life in the trenches. Finally, they harbored serious doubts that their generals (including Grant) could lead them to victory. We should not be surprised that the mine fiasco, in all of its horror, left the men even more demoralized and looking to direct their anger and frustrations – not unlike what German Americans in the Eleventh Corps at Chancellorsville experienced.

Soldiers such as Charles J. Mill (56th Mass), who declared that, “They cannot be trusted for anything, and are, in short, a hideous mistake,” likely experienced no discernible change during the war regarding their racial attitudes.

Thinking quite a bit about these men so expect a few more posts in the coming weeks. And if you haven’t done so already, pick up a copy of Manning’s book.