Lee-Jackson Day: Who Is It Good For? 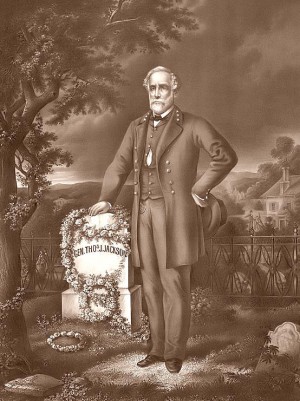 I’ve enjoyed reading the comments attached to my last post, which featured Governor Terry McAullife’s first Lee-Jackson Day Proclamation. As readers have noted it contains a couple questionable references, but what I find interesting is just how hollow it sounds. What could you possibly learn about these two men from reading this proclamation if you had no prior knowledge? I would say, next to nothing and yet this is a state holiday.

As it stands the proclamation avoids anything that smacks of controversy. It’s an innocent reminder of a time long past when there was something at stake for a large number of white Virginians in acknowledging the two Confederate warriors and, more importantly, the Lost Cause for which they fought. For most Virginians today who are impacted by the holiday it is little more than a day off from work. With each generation our distance from the war itself grows and the emotional cords fewer. We are likely seeing the last hurrah from a generation that grew up or came of age during the Civil War centennial.

Looking ahead fifty years, I would be very surprised if Virginia and other Southern states continue to acknowledge Lee-Jackson Day.