Latest Post Comment at SHPG: “I understand that there are slave quarters at the Lincoln home and they just make the claim that it was his barn. In the middle of the city!”

Update: Lincoln ordered infants into the army and Popeye’s Secret Fried Chicken recipe has also been discovered in a Civil War glass vial. 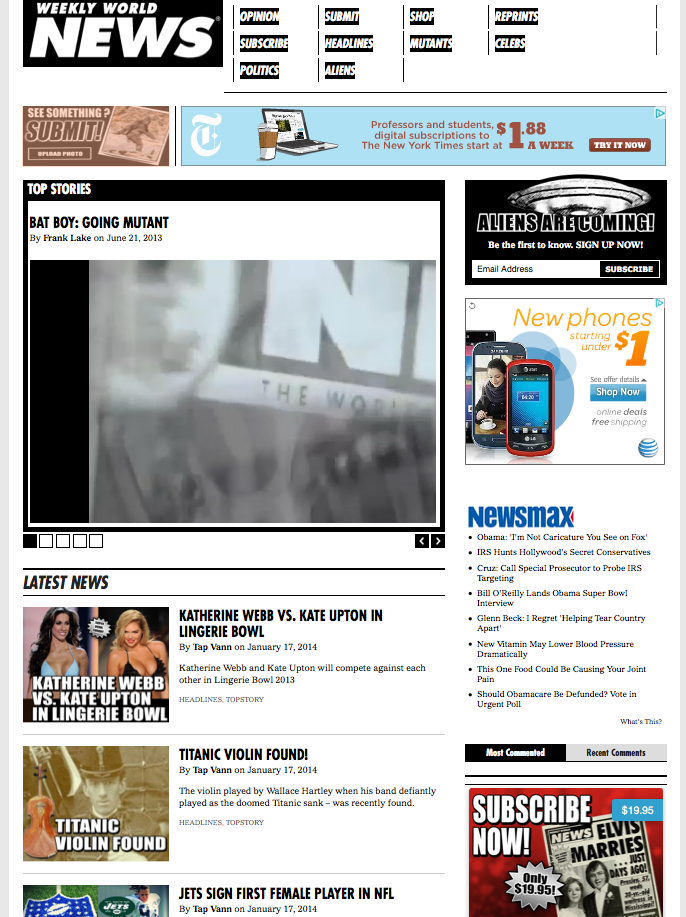 The Southern Heritage Preservation Group is committed to defending Confederate heritage and highlighting history that has been left out of school textbooks and ignored by revisionist left-wing historians and the liberal media. Yesterday, Gary Adams posted a shocking news item that claims that Abraham Lincoln owned slaves. He provided a link to a February 2012 article by Frank Lake at the Weekly World News. Do yourself a favor and read it and on once you finish laughing continue with the post.

The article itself has nothing to do with Lincoln owning slaves besides including claims to that effect at the beginning and end. The rest of it discusses a recently published book about Lincoln and colonization, which if Adams bothered to look at has nothing to do with whether the sixteenth president owned slaves.

Now, check out the headlines [screenshot to the right] from the site’s home page: “Bat Boy: Going Mutant,” “Aliens are Coming,” and down below we learn that “Jets Sign First Female Player in NFL.” It seems that Gary Adams has found one of many entertaining tabloid magazines on the Internet.

I don’t have this book, but it might be worthwhile reading. I had read that prior to his death, Lincoln was involved in a scheme to provide loan guarantees to Mexico and taking Mexico’s northern provinces as collateral for the loans, presumably for colonizing the emancipated slaves there. The scheme was dropped after the assassination and nothing ever came of it.

Interesting. I would not be surprised. Lincoln had no problem with the use of slave labor to finish constructing the capital dome during his administration.

This would be funny if it wasn’t so incredibly disturbing. It suggests that at least some of the people at the SHPG have absolutely no ability to judge a website. In their world, all websites are equal. This discovery easily rivals Ann DeWitt’s uncovering of an entire regiment of “Negro Cooks” in the Confederate army.

Next week we will likely learn from the same website that Robert E. Lee fathered an African American child or that he was really a martian.

Previous post: Ohio Men Cheer For the USCTs at Petersburg