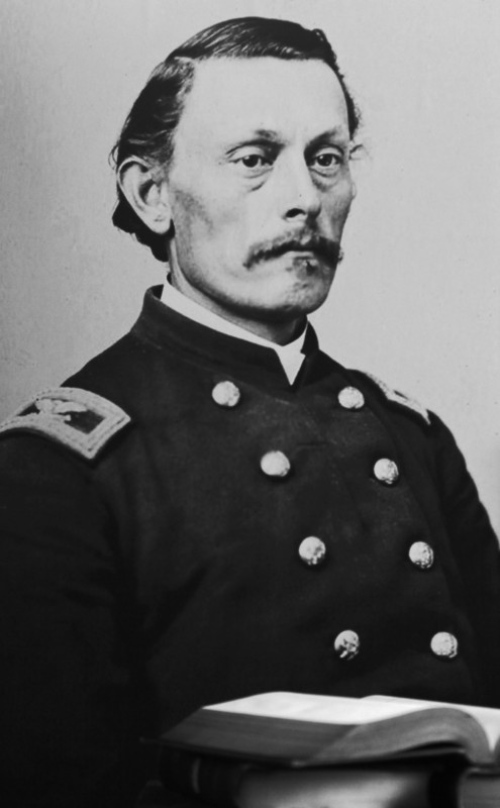 Alvin C. Voris rose through the ranks in command of Ohio troops and by the end of the war was brevetted major general. Below are a few excerpts from his letters which were published a few years ago as A Citizen-Soldier’s Civil War: The Letters of Brevet Major General Alvin C. Voris and edited by Jerome Mushkat.

I find the evolution of Voris’s thinking on the conduct and service of black soldiers to be quite interesting and reflective of a broader trend within the Army of the Potomac and Army of the James. By November 10 Lincoln had been reelected and Voris had taken temporary command of a black unit. The Crater represents the nadir of white perceptions of their black comrades in arms. There is no questioning the fact that Ferrero’s Fourth Division was scapegoated by both those who were on the battlefield that day and those who learned later about it later, but a closer look suggests that the condemnations were relatively restrained and short-term.

It’s a more complex story and one that I am currently exploring for an essay that I need to finish in the next few weeks.

I have just had a call from Col Bell, 4th N.H who gave me an account of our operation before Petersburg on Saturday morning last. We blew up a rebel fort and its contents, took their lines for some distance, which were occupied by the colored soldiers. But the black rascals got scared and dashed back on our troops with fixed bayonets, and so disorganized the white troops that the rebs retook a great part of their last works. All join in saying the “nigger” did verry badly and had no excuse for it. I fear that the expectations of the people at home are to be disappointed as tot he taking of Petersburg until new combinations and additional forces are put into the field. This is a terrible war & full of terrible blunders….

The whites blame “the niggers,” “the niggers” the Yankees for the defeat of Sunday last. I am led to think both were much to blame. But all troops are learning to dread to assault fortified positions.

It is a gratifying reflection that out of the misfortunes of war the nation is awaking to a realization of the beneficence of freedom and the inconsistency and poverty of slavery. I am glad the Union Party put the emancipation doctrine directly in issue, and am doubly glad the long and sorely tried judgment of the people has in the election of Mr. Lincoln sustained this great measure of justice, and proclaimed to the world that they knew & dared to do what justice and their great interest demanded.

To the people at home who through this campaign have heard the negro question harped upon with so much zeal & perhaps has furnished more bitter food for fierce denunciation than any other subject ever agitated, it would be astonishing to learn that in the army the prejudice heretofore existing against the negro has almost entirely died out. Officers return the salute of the colored soldiers with cordiality, and treat them with kindness, and the soldiers are glad to welcome them as comrades in arms. I do not mean by this that they make them their social associates, but they are not ashamed to recognize them as fellow soldiers and entitled to all the honors of veterans.

While I had rather command white troops I would not feel it any degradation to command colored troops. I have heard our men cheer the negroes for their exploits as heartily as if they belonged to the rapacious Europe & American race. The North will soon come to this, and in a few years will wonder why they ever were so unwise and unjust as to curse the colored man and damn his friends….

Next post: Defending Lee-Jackson Day from Me and My Followers

Previous post: What Exactly Are the Virginia Flaggers Protesting?