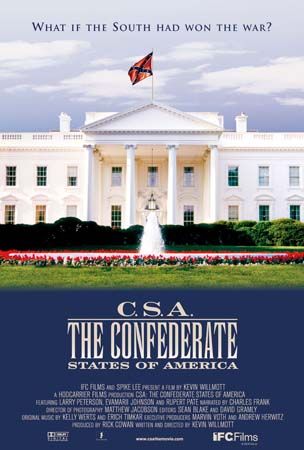 By now many of you have heard that an elite school in New York City has apologized for showing Kevin Wilmott’s satirical movie, “C.S.A.: The Confederate States of America,” which imagines what the United States would be like had the Confederacy won the Civil War. It’s still unclear what specifically led to the apology by the Dalton School beyond some of the students expressing concern about the film.

Let’s be clear, however, this is a case of Dalton’s administration and History Department dropping the ball and not a matter of the inappropriateness of the film itself. First, the film was shown to sophomores, who are likely not mature enough and there is no evidence that the students were given sufficient historical context to understand both the content and goals of Kevin Willmott’s film.

I showed the film while teaching in Virginia to a group of seniors, who were taking a version of my Civil War Memory course that focused specifically on film. By the time they watched “C.S.A.” we had already analyzed images of African Americans in films from “Birth of a Nation,” “Gone With the Wind,” “Shenandoah,” and “Glory.” Students had also read articles that included analysis of how the Lost Cause narrative of the Civil War understood slavery and blacks generally.

For the purposes of our class discussions the most interesting aspect of the movie were the faux commercials. It didn’t take long for students to understand that the racist imagery in commercials in a world where the Confederacy proved victorious were not much different from the reality of racism in commercials and other advertisements that were used in this country throughout much of the twentieth century. It’s not an easy movie to show, especially in a multi-racial classroom, but with the right preparation it can be incredibly effective.

One of the things that I value about teaching in a private school is the freedom to use a fairly wide range of resources in the classroom. It is impossible to imagine a public school allowing Willmott’s film to be shown, but with that freedom comes responsibility. It’s a shame because the Dalton School’s response to this incident makes it seem as if the film is somehow racist as opposed to seeing it as exposing the ways in which Americans have accepted and even embraced certain racist images, especially those associated with certain products.

Willmott himself summed up the problem quite well.

This, in essence, is the American problem in race. The minute that things become real, the minute that you get close to the edge, everything shuts down. This was an opportunity for dialogue in the school setting.

Let’s hope they get around to it if they haven’t already done so.

Previous post: Are We Coming to the End of Civil War Memory?