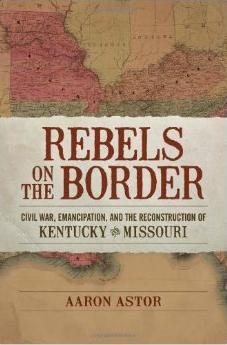 Since I don’t use a textbook in my U.S. History survey I am always on the lookout for relatively short excerpts from secondary sources that help me to pinpoint a specific historical question or problem. I’ve said before that one of the more challenging topics to teach is the distinction between race and slavery in nineteenth-century America. For most of my students (Virginia and Massachusetts) the lack of slavery in the North by the late antebellum period makes it difficult for them to appreciate the extent that racism permeated the region. They tend to see racism and slavery as two sides of the same coin, which is reinforced by their limited understanding of chattel slavery in the South.

This excerpt from Aaron Astor’s, Rebels on the Border: Civil War, Emancipation, and the Reconstruction of Kentucky and Missouri does a brilliant job of teasing out this important distinction. Wish I had come across it last week.

At the heart of Kentuckian and Missourian values was white supremacy, or more specifically, a belief that Western civilization was a product of characteristics unique to the white race and that all interracial relationships must protect the white race from subjugation or degradation by the black race. Failing to hold the line against attempts at racial equality would yield nothing less than complete reversion to barbarism, which whites believed inevitable wherever blacks lived without white authority. Most white northerners and southerners agreed with this racial order, but each section preserved white supremacy differently. Northerners simply excluded African Americans outright–states such as Indiana and Illinois legally banned black people from entering those states in 1860, and many other states placed onerous taxes on blacks who could not prove employment or property ownership–or failing that, segregated blacks and whites in all facets of social and economic life. White northerners protected white supremacy by monopolizing the property, power and labor force of the northern states. White southerners, living amid populations that often included large majorities of African Americans, embraced slavery as the natural system of racial and social control. Without slavery, white southerners feared, blacks would literally overrun and destroy white civilizations, re-creating either Haiti or Africa itself. (pp. 29-30)

I can’t help but think that this paragraph helps to frame – in so many ways –  the problem of race that our nation faced following the Civil War right down to the present day. This is a book that I’ve been wanting to read for some time and I am so glad I am finally getting around to it. Highly recommended.

Next post: Southern Hospitality in the Hands of Transplanted Yankees

Previous post: Kickstarting the Myth of the Black Confederate Soldier