Sentinels in Bronze and Granite 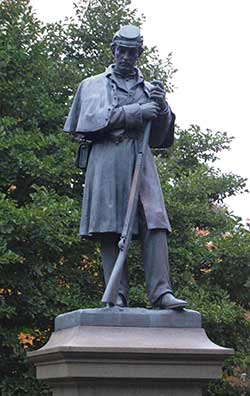 One of the nice surprises in the special issue of Common-place that I edited with Megan Kate Nelson is an essay that we had nothing to do with. Sarah Beetham’s “Object Lesson” on Civil War monuments and cemeteries is a wonderful introduction to the subject that was submitted independently from those that we commissioned. It fits perfectly into the issue given our overall theme. She begins with a description of Martin Millmore’s Roxbury Solider Monument in Forrest Hills Cemetery, which is five minutes from my house. It’s a beautiful place and one that I regularly visit. Millmore himself is buried close to the entrance. I am going to use it this week in class.

In a quiet glade amid the trees and lawns of Boston’s Forest Hills Cemetery, a bronze soldier of the American Civil War stands on a low plinth clutching his rifle (fig. 1). His posture is reminiscent of parade rest, a pose often assumed by soldiers on ceremonial occasions, but he gazes downward and to his right with a wistful air (fig. 2). He wears the standard overcoat and forage cap issued to soldiers of the Union Army for winter service, and his finely modeled, unbearded face reflects the youth of the typical Civil War volunteer. The base of the statue declares that it was “Erected by the City of Roxbury in honor of Her Soldiers, who died for their Country in the Rebellion of 1861-1865.” Its grassy clearing is enclosed with a low stone fence inscribed with the names, units, and dates of death of the Civil War soldiers of the Boston suburb of Roxbury (fig. 3). Amid the rolling hills and screening vegetation of the cemetery, the stone fence demarcates a space for quiet reflection. Overall, the monument is part gravestone and part triumph, mourning the deaths of the young soldiers of Roxbury while honoring their valorous deeds in the successful Union war effort.

Read the rest of the essay.

Next post: William T. Sherman: Man of the Year