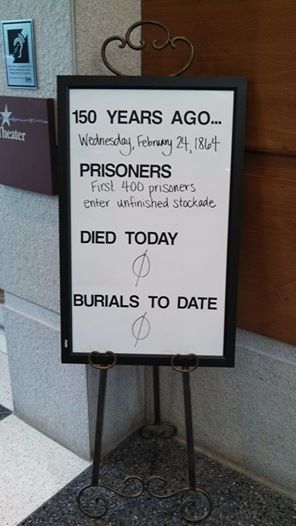 We should not be surprised by the irrational response by a select few to the selection of William T. Sherman as 1864s’ Man of the Year by an audience at the Museum of the Confederacy this past weekend. I applaud the MOC for maintaining an open Facebook page to facilitate responses and the very limited positive give and take that can be found. The most extreme comments come from people who see themselves as victims of Sherman’s actions in Georgia in 1864. They are most definitely not victims.

It might be helpful to place the destruction wrought by Sherman alongside the suffering of United States soldiers at Andersonville Prison, which commenced with its sesquicentennial commemoration today. One of my readers reminded me that there was likely much more suffering within the walls of the prison than that caused by Sherman throughout Georgia in 1864. On the one hand it’s a perspective that I never considered while at the same time it means very little to me.

One hundred and fifty years later we should be able to distance ourselves and consider the suffering of all Americans during the war as worthy of our attention. It was a war that made victims of everyone it touched from the slaves who endured hardships in the many contraband camps throughout the South to Richmonders and Charlestonians who lived among ruins by the end of the war to the tens of thousands of soldiers on both sides who lived with painful physical and psychological wounds for the remainder of their lives.

This doesn’t mean that we put aside questions of interpretation that address cause, context, and consequences; rather, it to acknowledge that the challenges and suffering experienced by all these people can bring meaning to our own lives regardless of where we live or the color of our skin.