Remembering the Battle of the Crater Reviewed in Civil War History 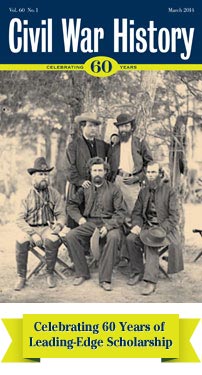 Thanks to Benjamin Cloyd – author of an excellent study of the history and memory of Civil War prisons – for the very fair review of my book in the most recent issue of Civil War History (March 2014). I should have focused much more on the intersection of the centennial and the civil rights movement in Petersburg.

Cloyd identifies what I now clearly see as the weaker sections of my book. This is likely the last review to appear in an academic journal and overall I am pleased with how the book has been received by the scholarly community.

The proliferation of Civil War memory studies over the past couple of decades testifies to the enduring presence of the Civil War as the event that looms over America’s modern history. We as Americans have always been simultaneously confused, exhausted, and even numbed by the cataclysm—yet we also remain compelled to engage with the past, drawn by the hope or suspicion that the story of the Civil War still continues to shape us for better or worse. It is in that spirit of optimism that Kevin Levin has contributed a valuable examination of the evolution of memory surrounding the famous (if often misunderstood) Battle of the Crater.

The author defines his terms clearly at the outset—to explore the “process of preserving a certain kind of memory that moves to minimize or ignore the participation of USCTs in one of the bloodiest battles of the Civil War” (2). As a meditation and amplification on the central role that race has played (and still does play) in the construction of Civil War memory—a theme long raised by other scholars of Civil War memory, most notably David Blight—Levin’s work must be considered a success.

Taking a chronological approach, Levin gracefully guides the reader from an account of the Battle of the Crater itself through a discussion of the competing legacies of the battle on display in contemporary Petersburg. The strength of this treatment is twofold. First, the author demonstrates that the “unspeakable” racial violence committed at the Crater has left a particular and persistent controversy that has made it difficult to reconcile the various strands of memory about the battle (32). Systematically confronting the tangled views of what happened at the Crater brings a litany of racial deflections and apologies into focus. But there is a larger purpose at play here as well. Levin desires to prove that the intricacies of remembering the Crater give us a window into the story of how we as Americans remember the war overall—that over the last 150 years, from Reconstruction to today’s sesquicentennial commemorations—”there still remains significant unwillingness on the part of the general public to acknowledge the tough issues of race in popular perceptions of Civil War history” (137). Instead of being relegated to the role of historical curiosity, the Battle of the Crater, in Levin’s convincing view, deserves to be understood as one of the central events of the Civil War, both then and now.

While well researched and structured, the book does contain some relative weaknesses. As is common among works on Civil War memory, Levin is most authoritative on the impact of the war’s legacy during Reconstruction and the emergence of Jim Crow, with a particularly worthy treatment of the controversy over the influential postwar political career of William Mahone. The result is a book that shifts from a confident tone to a more tentative one in the concluding chapters, as Levin is too often content to retreat to a generalized discussion about racial attitudes based on material from periodicals such as Ebony and Jet instead of pursuing a more precise examination of memory episodes in mid-twentieth-century Petersburg. To be fair, when examining the influence of memory at a particular historical location, not every period will generate the same level of interest. Nonetheless, the last couple of chapters are a bit fragmented compared to the earlier material. And the subtitle is catchy, but Levin could better develop the explanation of what he means by the phrase “war as murder,” so as to strengthen his core argument about the difficulty of coming to terms with the racial atrocities of the past.

These concerns should not discourage readers intrigued by the premise that the Civil War retains its grip on the American psyche. Levin has given us an argument that is not only timely and convincing but also sobering—revealing that, even after several generations, our memories of how the Civil War fundamentally challenged and altered American race relations remain strikingly incomplete.

Previous post: How You Apply For a Job at the Civil War Trust