The Rise of the West During the Sesquicentennial 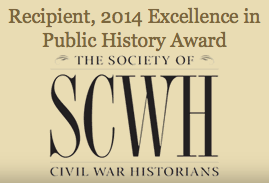 I’ve been upfront in my conviction that it is too early to write off the overall impact of the sesquicentennial. We ought to resist drawing uninformed comparisons with the centennial and conclusions based on attendance alone will not get us very far. There are a broad range of factors that need to be taken into consideration.

One factor that has not received much attention is the geographical scope of events related to the sesquicentennial. It’s no surprise that the large battles in the East have received and will continue to receive the most attention by the mainstream media. Right now its the Wilderness, but if you spend some time sifting through news feeds you will soon learn that there is quite a bit going on in other parts of the country.

This past year I was honored to be asked by Anne Sarah Rubin, president of the Society of Civil War Historians, to chair a committee for their Public History Award. I worked with Garry Adelman and Antoinette Van Zelm in sifting through some incredibly creative exhibits and programs from institutions from across the country. We received submissions from institutions with large budgets and others that are clearly working on a shoe-string budget.

What I was pleasantly surprised by, however, was the number of submissions from institutions west of the Appalachians. The War in the West is front and center in many of these communities. In fact, our top 2 submissions were from this part of the country.

The winner, which was recently announced, is the Kansas City Public Library’s “Civil War on the Western Border”. The project combines the best of digital history with traditional scholarship and a commitment to public outreach through lectures and other programs. The award comes with a $5,000 prize. Congratulations.

I am going to have to go back to Robert Cook’s book on the centennial, but I am going to venture that the Border War was not on most people’s radar during the early 1960s. Along with the rise of the black Union soldier narrative it may constitute the most dramatic shift in our popular memory of the war in recent decades. It’s an important story.

Over the next few weeks I am going to feature some of the other submissions. Thanks again to Garry and Antoinette for a job well done.