Another Defeat For the Virginia Flaggers 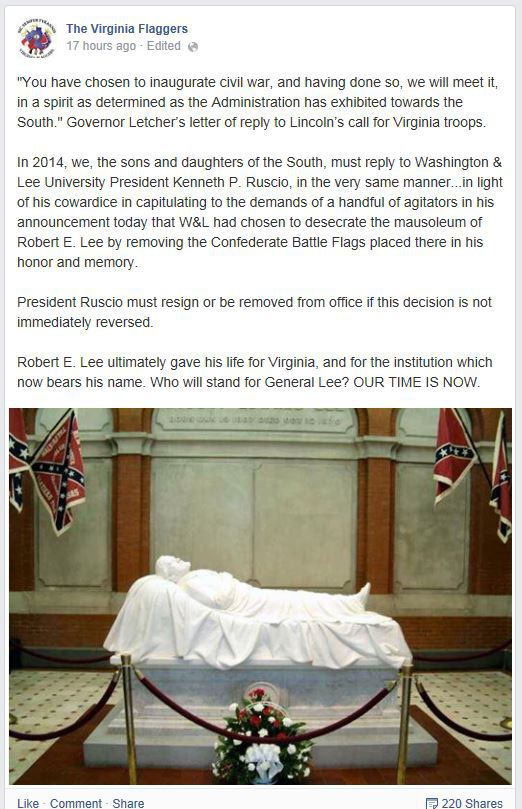 With each perceived heritage violation the Virginia Flaggers somehow manage to place themselves further from the mainstream when it comes to the display of the Confederate flag. Their assumed stance that they alone ought to dictate what it means to commemorate and remember the Confederate past has won them very few, if any, allies in Virginia and beyond. Even after all the protests they have yet to garner one significant victory.

The controversy at W&L was a perfect opportunity for the Virginia Flaggers to demonstrate their ability to engage in some creative thinking and sincere interest in a solution that would be satisfactory to all constituents. Unfortunately, but perhaps not surprisingly all the Flaggers could muster was much of the same extreme outrage and self-righteousness in response to what most  observers believe was a reasonable response by the president.

In fact, I still don’t understand why the Flaggers and others are so upset about the president’s response. As I pointed out the other day the students in question actually got very little of what they originally demanded. I have my doubts that the majority of the people who post on the Virginia Flaggers’ Facebook page even read the president’s response.

At the center of this controversy is the removal of replica flags around the Lee Recumbent Monument that were placed decades after his death. What seems to have been lost in their call for a letter campaign, marches, calls for the president’s resignation, etc. is that the school has arranged for original Confederate battle flags to be displayed in the chapel museum on the same level as the Lee family crypt. The Flaggers and others have placed themselves in an untenable position.

The outrage over this decision fits neatly into previous Flagger protests. Let’s review. The organization known as the Virginia Flaggers started over the removal of a Confederate flag that had been displayed outside of the chapel at the “Old Soldiers’ Home” in Richmond, Virginia. The group continues to protest even though there are multiple Confederate flags on display inside. In 2012 members of the Flaggers traveled to Appomattox to protest the new Museum of the Confederacy’s decision not to fly a Confederate flag in the entrance way of the building. Visitors can see multiple original flags on display inside the museum. I would love to see the Virginia Flaggers organize a protest near W&L’s campus once an original flag is placed on display inside the chapel.

If they do organize a protest they probably should not look for much support from the student body. I’ve visited the campus multiple times. I have a pretty good sense of the student body given that the school I taught at in central Virginia for ten years sent a steady stream of graduates to Lexington. One recent graduate of W&L, who I remember as politically conservative, contacted me last night and offered the following.

I personally think Ruscio’s response was great. He is making an attempt at compromise while being unwilling to compromise the history of our school and country- in particular that the real flags will be brought in and displayed in the museum. I also strongly support what Ruscio said about MLK programming being a stronger recognition of the holiday and what MLK accomplished than a holiday which students would look at as “another day off”

Oh well, the Flaggers will always have Virginia’s highways.