How Far Will the Virginia Flaggers Go For Attention?

Update #2: Here is the latest. The university issued the following statement: “According to our Office of Public Safety, our officers reported four occasions when they interacted with individuals who were participating in the July 26 rally sponsored by the Sons of Confederate Veterans in downtown Lexington. The officers characterized all of these interactions as respectful. They did not record names or ages of any of the individuals.”

Update: Brandon Dorsey and the Stonewall Brigade (SCV) is now demanding that W&L apologize to the individual who was supposedly harassed by police on campus this past Saturday. Not a shred of evidence has been presented substantiating the accusation.

I’ve already said that yesterday’s protest in Lexington, Virginia over the removal of replica Confederate flags will likely lead nowhere. The Virginia Flaggers know this which is why they have now gone to great lengths to stage another conflict to garner sympathy for their cause.

Earlier today a comment was left purporting to be that of a student at Washington & Lee University.

As a student of Washington and Lee University, I witnessed today’s events with disgust. All those hateful racist white people waving their evil symbols in my face. I saw a teenage white boy trying to walk on campus wearing a shirt with a confederate flag on it, and I demanded the police stop him. They went over at my request, surrounded him, and told him to either turn his shirt inside out, leave, or face arrest. The white boy began to cry! Haha. After the police pushed him twice, he slowly took his shirt off and turned it inside out and put it back on again. I was so proud the police did that for me, because it is my school. I go here and the white boy doesn’t. I followed him closely and he walked over to the Chapel and took a photograph of that dead horse Travellor. He saw me behind him and he ran away. Today was a great day for us and the Committee. I thank you, Mr. Levin, for all you do to help us remove all this Confederate racist and terror symbols.

I was suspicious of the comment given that the author did not use a W&L email address and later I learned that Jonathan Till is not a student at the university. Even more suspicious is that while campus security was on patrol the police were not on campus yesterday and a W&L student would know the difference. 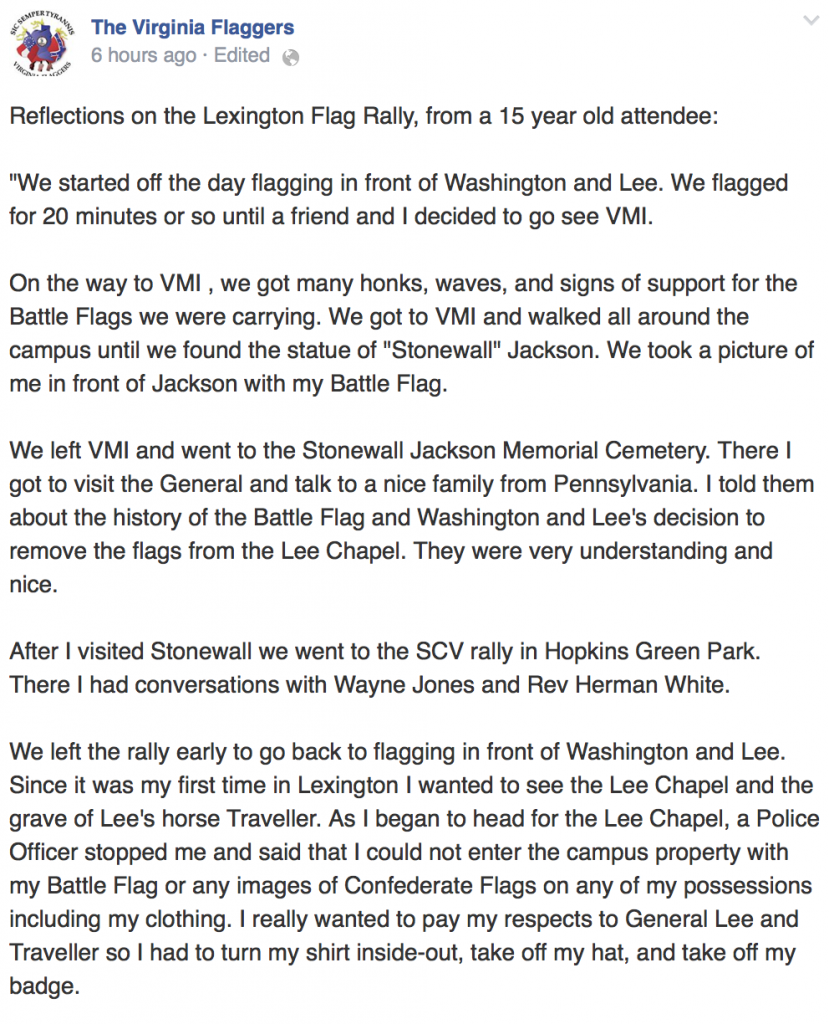 As you can see there is something very suspicious about this Facebook post, which has now appeared on a number of other heritage Facebook pages and has garnered the typical comments in response. I would venture to suggest that the author of the blog comment and this post is the same person.

We’ve been here before, but this little fabrication takes the cake.

Next post: Living Up to Robert E. Lee’s Code of Honor

Previous post: What the Protest at Washington & Lee University is Really About