Update: Williams offers an update that confirms that his problem is more with Robin Williams’s view of the Confederate than anything having to do with me. I have never compared Confederate soldiers with Nazis, but that isn’t even what Robin Williams is suggesting anyway. Any reasonable person will see the post for what it is: a simple acknowledgment of Robin Williams’s brilliant sense of humor.

I’ve never had a problem with readers and fellow bloggers criticizing what I post here. Certainly, much of what I write is open to critical response, but for the life of me I have no idea what Richard Williams finds problematic about this post. Like many of you I was saddened to hear about the death of Robin Williams.

All I wanted to do was offer a brief reference in his honor, but in a way that connected to this blog’s theme. I came across the quote in question and thought it beautifully captured his ability to combine comedy and an astute observation. You may not agree with it, but I certainly didn’t see anything inappropriate or “odd” about posting it. 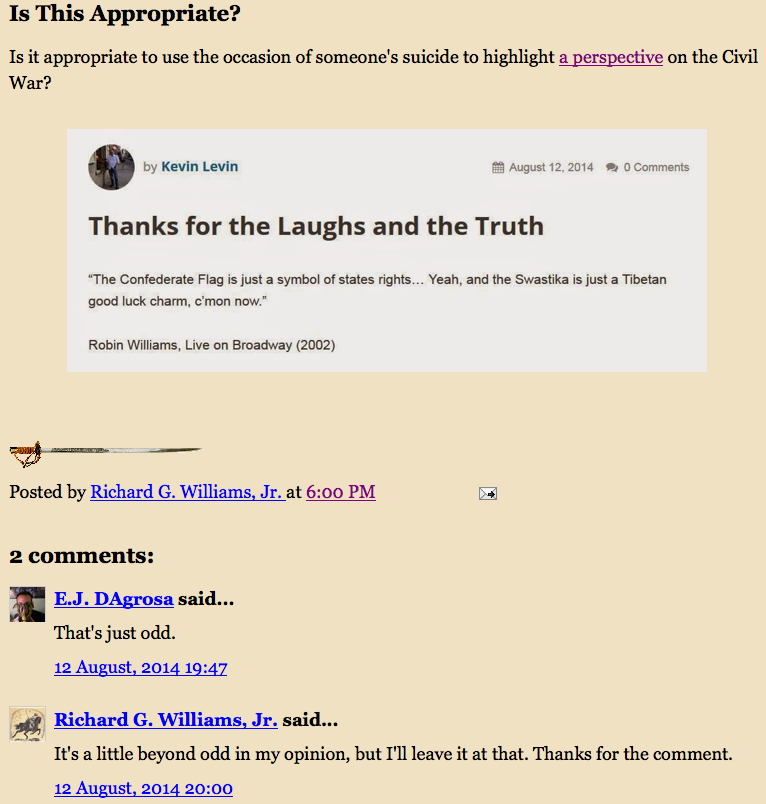 Perhaps Mr. Williams will elaborate on what he finds inappropriate or perhaps this is just a way to attract attention. Either way, I think it’s safe to say that Williams’s post is not so much “odd” as it is petty. And to think that I just went out of my way to congratulate him on his forthcoming publication on the Civil War in Waynesboro, Virginia. You are very welcome.

Previous post: Embracing the Safety of Reconciliation in Petersburg