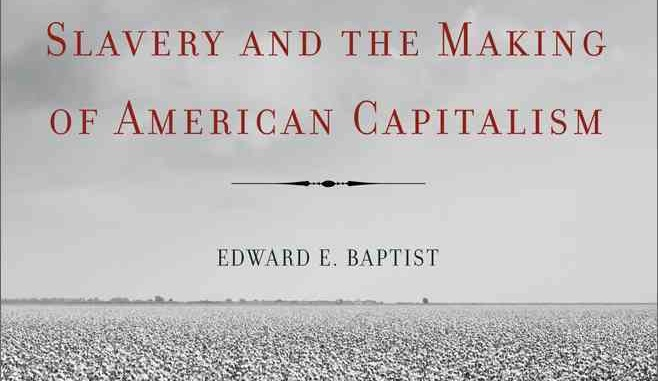 Chapter 7 of Edward Baptist’s The Half Has Never Been Told: Slavery and the Making of American Capitalism begins with an incredibly violent and unusual description of a new season’s planting.

Here are a few excerpts from that opening section.

The next day it rains hard in the morning, but when it stops the men bring the mules and the plows out. The spongy earth oozes into the hollows, sucking the metal plow points. “Fuck this mud,” the men mutter.

Fuck. From on Old English word meaning: to strike, to beat. Before that, in an even older language: to plow. To tear open.

The seeds are waiting.

In the sack in the shed. Or maybe safe under the entrepreneur’s high bed. The bed where he fucks his wife. Bed brought by wagon from the landing, bed bought with last year’s crop. Maybe he didn’t bring his wife. Maybe the sack is under the bed where he fucks the sixteen-year-old light-skinned girl from Maryland, also bought with last year’s crop. Maybe she is the same girl who washes the bloodstains from the sheets in the morning. Who carries the chamber pot to the woods. Who turns it over, brings it back empty, sets it by his side of the bed. Bumps her toe on the bulging sack, full of tiny seeds….

The next day, the rain falls. Water molecules leach through the seed coat. The helixes awaken. They twist, shudder break apart, draw more molecules to their open spaces, building their own mirrors. From them march streams of chemical messengers; orders that compel whole cells to stretch and split into twins. The embryo plant bulges. It shatters the seed hull from within and forces the stem up toward unseen light.

Squatting in the creek, the girl washes herself frantically. She does not know that if the planter’s seed is motile enough, it has already journeyed up into her hours ago, questing for her own. If this is her time, they will meet…. (p. 216)

Baptist goes on to describe the creation of new cotton seeds and their eventual sprouting into new plants.

This tree-turned-into-a-bush, in short, is fucked. So, too, is the soil. When the enslaved men broke it open for the entrepreneur, he fucked this dirt with them as his tool. He fucked this field. He might fuck their wives out in the woods, or in the corn when it is high. Or their daughter in the kitchen. The the next new girl he buys at New Orleans.

But he fucks the men too. He plants in all his hands the seeds of his dreams. In fact, he plants them all, men and women, in this place, just as he plants as those seeds. Plants, ecosystems, people strain to live their lives according to their own codes, but he twists their efforts into helixes of his own design. He takes their product, keeps it for himself. He breaks open the skin on their backs with his fucking lash, striking their lives with his power, marking them and their world with his desire. (p. 217)

Next post: Remembering Pvt. Louis Martin in the Land of Lincoln