I’ve always struggled with the way I teach the history of slavery to high school students. Pushing my students toward what I hope is a meaningful overview of slavery’s evolution and eventual demise inevitably overshadows change over time, regional differences, and even runs the risk of minimizing the horror of slavery itself. This last category is especially difficult to convey.

I can share movie clips from Amistad or 12 Years a Slave and even play with the idea of introducing a short excerpt from Edward Baptists’s new book, but I often worry about introducing sources that primarily work on their emotions. In other words, I want my students to be able to finish a unit on slavery with more than just that slavery was really bad.

It is with this in mind that I came across a little twitter experiment by Caleb McDaniel, who I have been following in one form or another since 2005. Professor McDaniel teaches at Rice University and has a new book out on history of abolitionism in the broader transatlantic world, which is well worth reading.

Caleb was looking for a way for his students to comprehend a statistic first published by Herbert Gutman that between on average a slave was sold every 3.6 minutes between 1820 and 1860. To me this is one of the more horrific aspects of slavery. Again, there are any number of ways to approach the scale of slave sales during this period, but how do you do so constructively – in a way that conveys some sense of the numbers involved and the experience of what such a moment may have included for all parties involved.

You can read the backstory for yourself at Caleb’s website, but the long and short of it is that he decided to set up a twitter account that tweets out a reminder of a slave sale, accompanied by links, every 3.6 minutes. 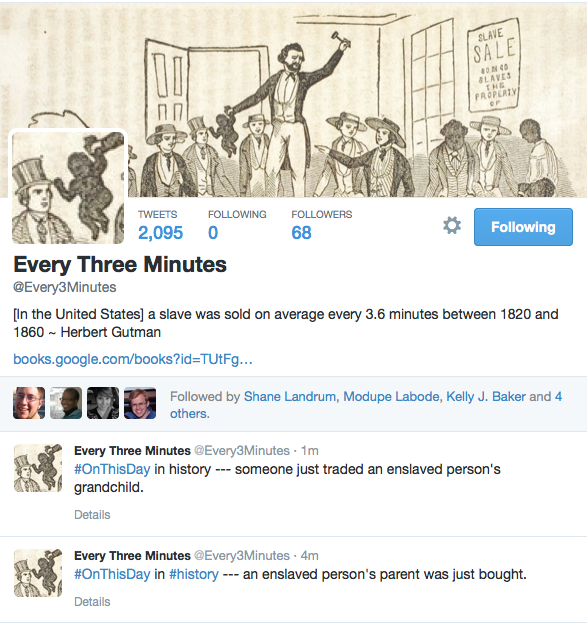 I’ve been following the account for the past few days and I am still wrapping my head around how effectively it functions as a teaching tool and exactly what it conveys. Overall, I think it’s an incredibly creative approach. There are a number of ways that this feed will be experienced depending on when you access twitter as well as who and how many you follow. Right now the feed is cycling around relatively few tweets so I wonder if there is a way to expand on this. Certainly there is plenty of time to work on enriching the feed given the total number of sales that could be tweeted. Perhaps this could be turned into some kind of open source project.

I would be interested to hear what others think and how it might be utilized in a history classroom.

Next post: “America Is Not the Greatest Country in the World”