The Continued Appeal of the Lost Cause

I frequent a number of Facebook pages that attract people who, for one reason or another, cling tightly to the Lost Cause narrative. You will not be surprised to learn that one of my favorites is called, “Black Confederates in the Civil War.” One of the reasons I visit is because members regularly post excerpts from Confederate Veteran and other publications and even primary sources from websites such as Fold3. It’s like having an army of researchers at your disposal. I’ve collected hundreds of such sources for my book project.

These postings are rarely accompanied by any attempt at interpretation. It’s understood by the members of the group that the postings offer undeniable proof of the existence of black Confederate soldiers. One of the more frequent posters in recent months has been Teresa Roane, who at one time worked as an archivist at the Museum of the Confederacy and is now apparently working for the United Daughters of the Confederacy. A few years ago Ms. Roane sent me a package of requested materials related to camp servants and impressed slaves from the MOC.

You may find it interesting that she is African American.

Ms. Roane posts regularly in a group that is overwhelmingly white. The stories of supposedly loyal black soldiers and slaves are happily consumed and the comment threads that follow offer readers the opportunity to strike an imaginary blow at those who they believe are trying to hide this history from the general public our deny it outright.

Once in a while, however, a post and comment thread are worth highlighting. Consider this excerpt from Confederate Veteran (June 1896) , which was posted by Ms. Roane:

CHATTANOOGA NEGROES COMPLIMENT A CONFEDERATE.—W.P. McClatchy, Commander N. B. Forrest Camp, Chattanooga, Tenn., has been honored by the Negro men of that city. They presented him with a gold-headed cane. Addresses were made by J. W. White and J. G. Burge, Negro lawyers there. Comrade McClatchy held the office of City Recorder (Judge of the City) Court) last year, and at the expiration of his term he was greatly surprised when these men presented it as a token of their friendship and esteem, and for the just and impartial manner in which he had dealt with their race.. He asked them why they “U.C.V. 1861-65,” engraved on it, and they replied that they wished to emphasize that while he was a Southern man, and a Confederate soldier, he had administered the law justly and impartially. The N. B. Forrest Camp hearing of this compliment to its commander, by a rising vote thanked the donors for their expression of confidence in and esteem for a Confederate soldier, and a Southern Democrat who had “administered the law, in wisdom, justice and moderation.”

In a note comrade says: I never had a present in my life that I appreciated any more than this. Every true Southerner understands and appreciates a good Negro, while the Negro understands and that the Southern man is the best friend he has. But for the meddling of people who really care nothing for the Negro, but who are prejudiced against the South, there would be no friction between the races.

You can find these postwar accounts throughout Confederate Veteran as well as other publications, especially local newspapers. Again, no attempt is made to interpret this account by providing any sort of historical context. It is simply taken at face value. It reminds me of a question/comment I was confronted with last July during my talk marking the 150th anniversary of the Crater. The audience member attempted to paint a picture of peaceful race relations in Petersburg, Virginia after the war owing to the presentation of a ring to William Mahone by the black community.

Now, perhaps the above source speaks for itself, but to grant this we must ignore the broader historical context of the 1890s and the rise of Jim Crow. Once we ask why the black community presented a former Confederate with a gold-headed cane in 1896 we are asking a very different question. What did this group hope to accomplish as a result of such an honor. Now we are closer to doing history.

Historical rigor or any kind of analysis of primary sources, however, is not the goal here and that is what makes this post and the site as a whole so fascinating to me. 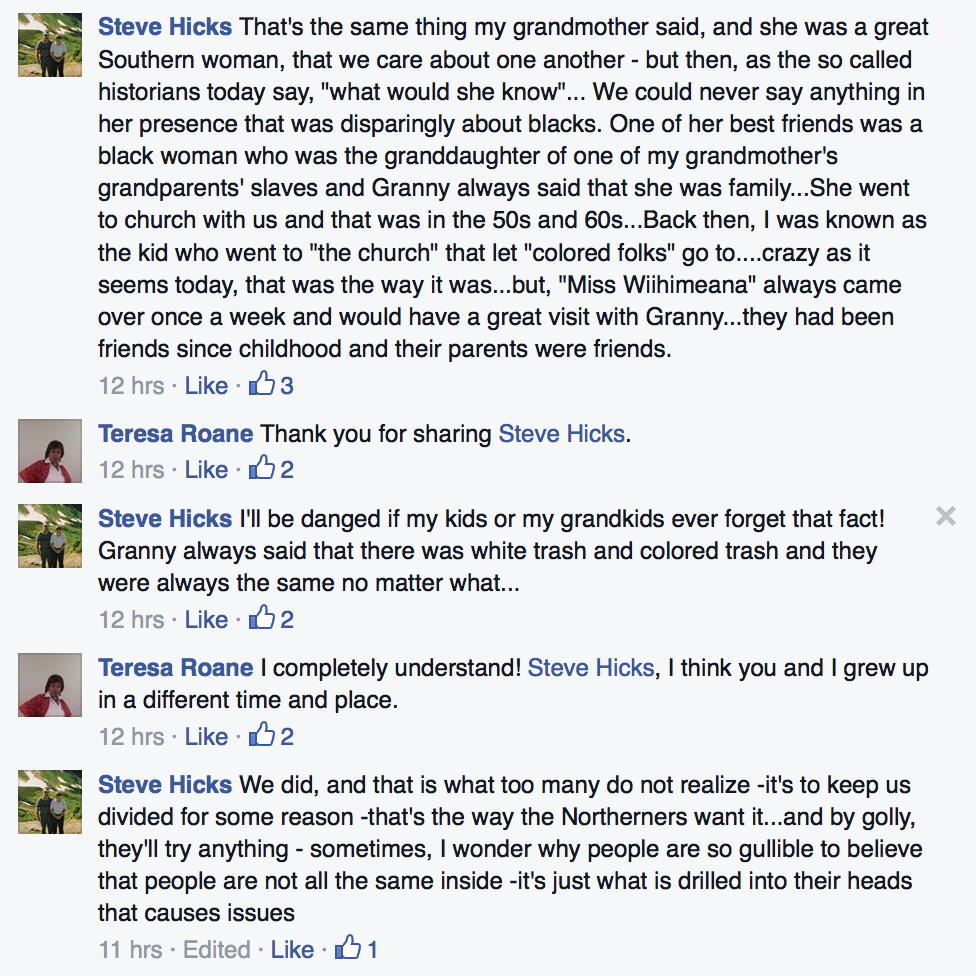 When you read the comments it becomes clear why the above account and the black Confederate accounts that populate this site are so seductive. These stories offer an alternative to the news of racial unrest across the country. It reduces racial violence to a historical anomaly.

I’ve always had difficulty understanding why African Americans such as Ms. Roane, Karen Cooper and H.K. Edgerton actively promote such a discredited interpretation of the past within communities that are overwhelmingly white for a reason.

Perhaps its as simple as acknowledging that the use of the past to transcend what currently divides us knows no racial boundaries.

Next post: How Secure Was Slavery in the Union?