Four weeks into my undergraduate research seminar at the American Antiquarian Society and things could not be going better. I am lucky to have an incredibly thoughtful group of students. Today we discussed the first half of James McPherson’s For Cause and Comrades: Why Men Fought in the Civil War with two students leading the seminar. We took apart McPherson’s argument, the organization of the individual chapters and also compared it with the argument made in Gary Gallagher’s The Union War, which we discussed last week.

For the second hour we worked with curator Vincent Golden on Civil War newspapers, specifically Union regimental/camp newspapers. The AAS has an impressive collection from throughout the war and includes substantial runs of individual titles. I remember seeing them referenced in Chandra Manning’s What This Cruel War Was Over: Soldiers, Slavery, and the Civil War, but I believe she is the exception among Civil War historians. My hope is that at least one student will make use of these newspapers for the final research paper.

I spent a few minutes going through an issue of “Grant’s Petersburg Progress” dated April 4, 1865. In the bottom corner is what appears to be an advertisement for a slave sale, which given the date and the source would seem very odd. A closer look reveals a clever attempt at humor just five days before Lee’s surrender. 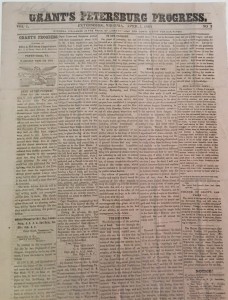 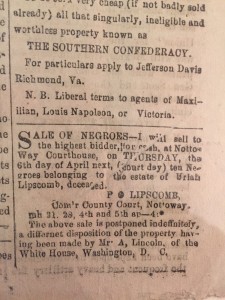 Next week we will finish McPherson and then move on to Drew G. Faust’s This Republic of Suffering: Death and the American Civil War. Students will also spend this week familiarizing themselves with manuscripts in the form of a scavenger hunt that involves searching the letters of Civil War soldiers. I am curious as to how they will fair with nineteenth century handwriting. We shall see.

So far, this experience has been a blast.

Next post: St. Paul’s Episcopal and the Limits of Public History