Mapping Slavery in the North 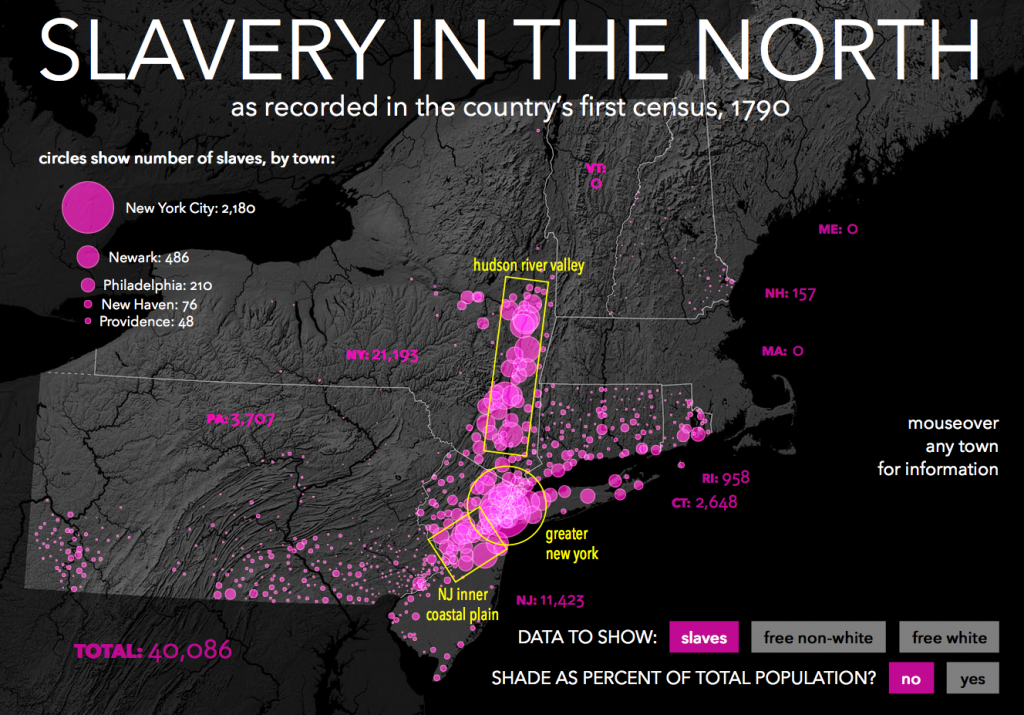 Update: My friend and fellow local historian (and genealogist), Liz Loveland, reminds me that use of the census “obscures that people were illegally keeping people enslaved in free states.” In other words, reliance on the census points to a sharper transition between slavery and freedom than is warranted.

A map of slavery in the North that utilizes the 1790 census has been making the rounds on my twitter and Facebook feeds over the past few days. It is well worth examining and it certainly be used utilized to achieve a number of goals in the history classroom. The map is interactive and allows the user to explore local slave and non-white populations without losing sight of just how widespread and concentrated such populations were throughout the region at the end of the 18th century.

As much information as this map provides, however, it is a somewhat misleading. First, Maine was not a state in 1790. More interesting, however, is the status of Massachusetts as void of enslaved persons in 1790. It obscures the fact that the colony included somewhere around 5,000 slaves (or roughly 2.2% of the population by 1764) before a series of court cases gradually eroded the institution during the Revolution. The map does show the “free non-white” population in the state, but unless the teacher or user already knows that slavery existed in Massachusetts it is likely that the connection will not be made.

The narrative of slavery and emancipation has never been central to how Bay Staters understand its history. Between the Revolution and the Civil War this history was overshadowed by a new narrative that placed Massachusetts at the center of the creation of a new nation. If slavery was discussed at all, according to historian Margot Minardi, it was understood as benign and its end inevitable. The history of slavery in the North is still widely misunderstood or overlooked entirely, but we have seen some progress.

One such place where this change is taking place is at The Royall House & Slave Quarters in Medford, near Boston. Isaac Royall was the largest slaveowner in Massachusetts by the eve of the Revolution. The setting offers the opportunity to talk about the Royall family, the many enslaved persons who lived on the property and the broader story of slavery and racism in the North. I have been volunteering at Royall House for the past few months and hope to help out as a guide this summer.

Consider visiting if you live in the Boston area or if you are planning a trip to the city this summer.