What Did They Call Steve Perry (Eberhart)?

Update: It looks like the individual responsible for this Facebook post does not appreciate my corrections nor does it appear she fully grasp how little she knows about the individual. Apparently, she believes that Perry and Eberhart are two different people. You can’t make this stuff up. 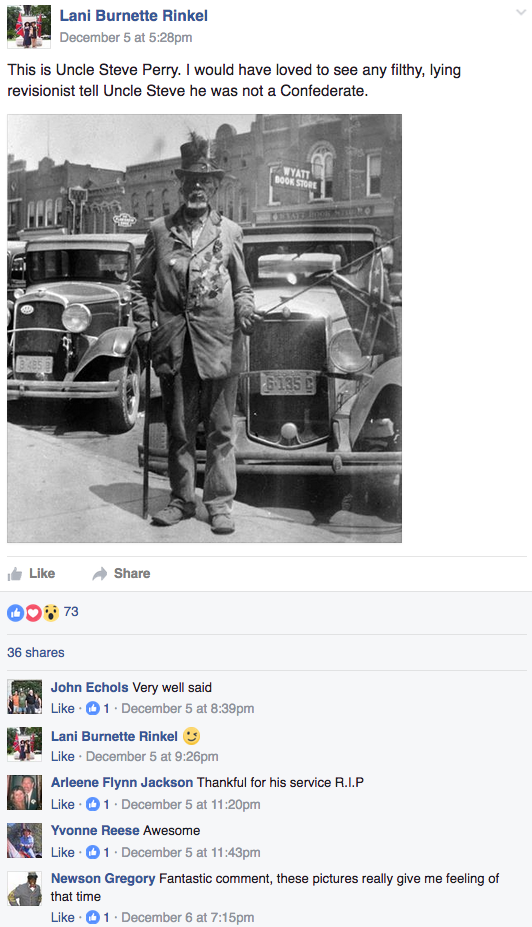 I picked up this little screenshot from one of the Facebook pages devoted to spreading the myth of the black Confederate. This is Steve Perry, who actually went by Steve Eberhart when attending Confederate Veterans’ reunions. Eberhart functioned as something akin to a stage name. He is the subject of chapter 3 of my black Confederates book and he is absolutely fascinating.

This screenshot and commentary is just another example of the presentism that advocates fall victim to as well as their basic ignorance surrounding the relevant wartime and postwar history when attempting to interpret the lives of camp slaves. So far I have yet to find a single reference to Perry as a “Confederate” or anything else that suggests that white Southerners viewed him or any other former camp slave as a soldier.

Here are just a few of the references that I have uncovered in various postwar sources:

No number of Facebook “likes”, “shares” or virtual hand slapping in the comments section will change the fact that Perry (Eberhart) was never acknowledged as a Confederate during his life time. Spend enough time in Eberhart’s world and it becomes clear that he understood this. It also becomes clear that he took full advantage of the role that he understood white Southerners wanted him to play.