This week Mississippi’s Governor Phil Bryant signed this year’s proclamation recognizing April as Confederate Heritage Month. The proclamation fails to say anything praiseworthy about the Confederacy or the men who fought in the ranks. Yes, it says that the men who served should be “honored” but offers nothing as to why it is justified. It is ultimately an exercise in saying the least possible without offending.

There was a time when Southern states were not embarrassed when recognizing Confederate History/Heritage Month. 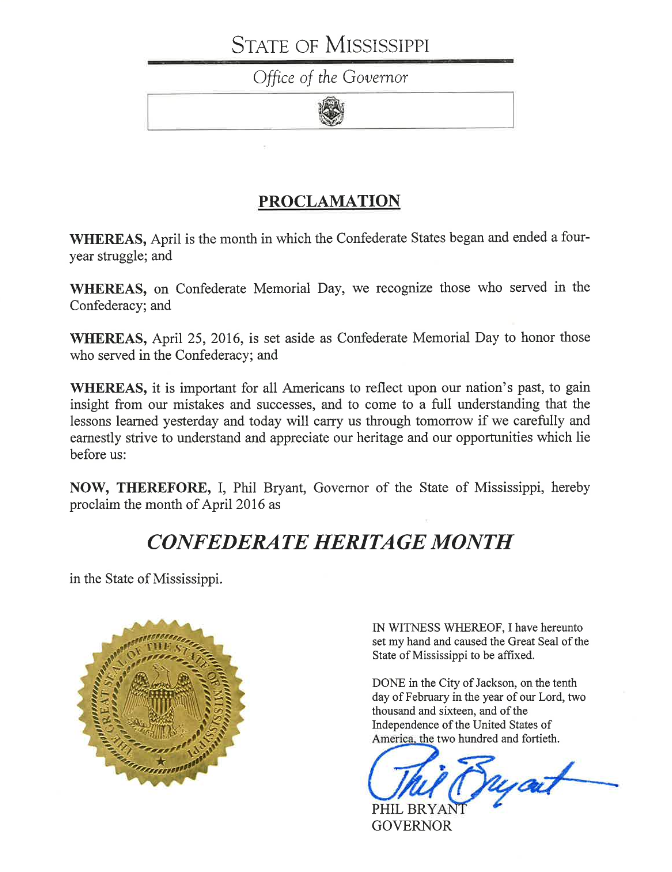 This is little more than a fig leaf to a shrinking constituency in Mississippi that still needs a symbolic gesture from the state in support of their flawed understanding of the Confederacy. It is the best evidence that even in Mississippi the idea of honoring a cause wrapped up in the perpetuation of slavery and white supremacy ought to be abandoned.

And just because Governor Bryant can’t bring himself to recognize the reason for Mississippi’s secession and participation in the brief history of the Confederacy doesn’t mean that we must follow suit:

Our position is thoroughly identified with the institution of slavery—the greatest material interest of the world. Its labor supplies the product which constitutes by far the largest and most important portions of commerce of the earth. These products are peculiar to the climate verging on the tropical regions, and by an imperious law of nature, none but the black race can bear exposure to the tropical sun. These products have become necessities of the world, and a blow at slavery is a blow at commerce and civilization. That blow has been long aimed at the institution, and was at the point of reaching its consummation. There was no choice left us but submission to the mandates of abolition, or a dissolution of the Union, whose principles had been subverted to work out our ruin.

Previous post: ‘Robert E. Lee is Back and He is Pissed Off’