The Future of Black Confederates in 1860

One of the texts that I recently finished reading is Edmund Ruffin’s Anticipations of the Future To Serve As Lessons For the Present Time (1860). Most of you know Ruffin as the fire-eating secessionist, who took his own life in 1865, but before the war he was a prolific author and publisher of the Farmers’ Register.

In Anticipations, Ruffin imagines a war between the free and slave states that follows the election of William H. Seward in 1864. The book is instructive on a number of fronts, but I want to briefly address his discussion of how the slave states utilized slave labor during a war, which resulted in Southern independence. First, Ruffin imagines an invasion of Kentucky – which in this story the state seceded – made up of both fugitive slaves and white soldiers and led by abolitionist general Owen Brown, the son of John Brown. The paternalism of southern slaveowners as well as the lack of military skill among the black soldiers doomed the invasion from the beginning, according to Ruffin. Many of the black soldiers deserted or were captured. Some of those who fell in the latter category volunteered to execute captured white soldiers.

In short, slaves made poor soldiers and they certainly wouldn’t turn on their former slaveholders. Southern paternalism remained intact.

Ruffin’s depiction of black manhood and martial skill failed to anticipate the service of USCTs during the Civil War, but his anticipation of how slaves would be utilized by the Confederacy proved to be prescient. Ruffin offers the following observation in explaining the success of the slave states in Anticipations. 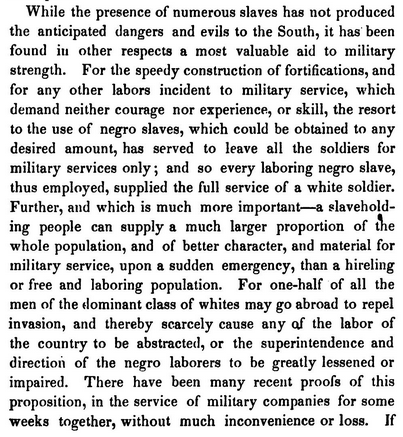 A number of points stand out. First, slaves never presented a threat to the war effort or race relations in the South. More importantly, Ruffin imagines a war that involves the mobilization of the slave population to assist with wartime projects that allow for the largest number of white southerners to serve as front line soldiers. Ruffin maintains a strict distinction between whites, who embody a “better character, and material for military service” and blacks who are suitable for physical labor. In short, the war did not disrupt slavery or the racial hierarchy.

But the other thing that is worth acknowledging is that Ruffin found no need to imagine a southern war for independence that united blacks and whites on the battlefield as soldiers. Perhaps it would be more accurate to suggest that in 1860 he simply could not envision such a scenario.

In a sense, Ruffin’s anticipation of the future use of slaves during the war reflects how Confederate veterans and other southern writers imagined (or remembered) the war throughout the postwar period. Very few, if any, Confederate veterans and writers imagined blacks used as soldiers, apart from when discussing the late authorization for slave recruitment in March 1865. Like Ruffin’s Anticipations, postwar accounts assumed a racialized understanding of the battlefield and a strict distinction between the virtues of white soldiers and black inferiority.

As I have said more than once, actual Confederates would be dumbfounded by many of the claims made about black Confederates today.

Next post: A Book Dedication That is ‘Altogether Fitting and Proper’