What Can We Learn From the “Angel of Marye’s Heights”?

Thanks to Wayne Motts and the National Civil War Museum in Harrisburg, PA for hosting me yesterday as part of their monthly lecture series. We had a packed house for my talk on Confederate monuments that included one couple that drove two hours for the talk. It’s certainly an important topic and I very much appreciate the enthusiasm and curiosity of the audience.

One of the monuments that I briefly discussed yesterday is the monument on the Fredericksburg battlefield to Sgt. Richard Kirkland (a.k.a. “The Angel of Marye’s Heights”). You are all aware of it. In fact, it was the subject of a guest post a few years back that challenged whether there is reason to believe the story that Kirkland risked his own life to bring water to wounded Union soldiers. 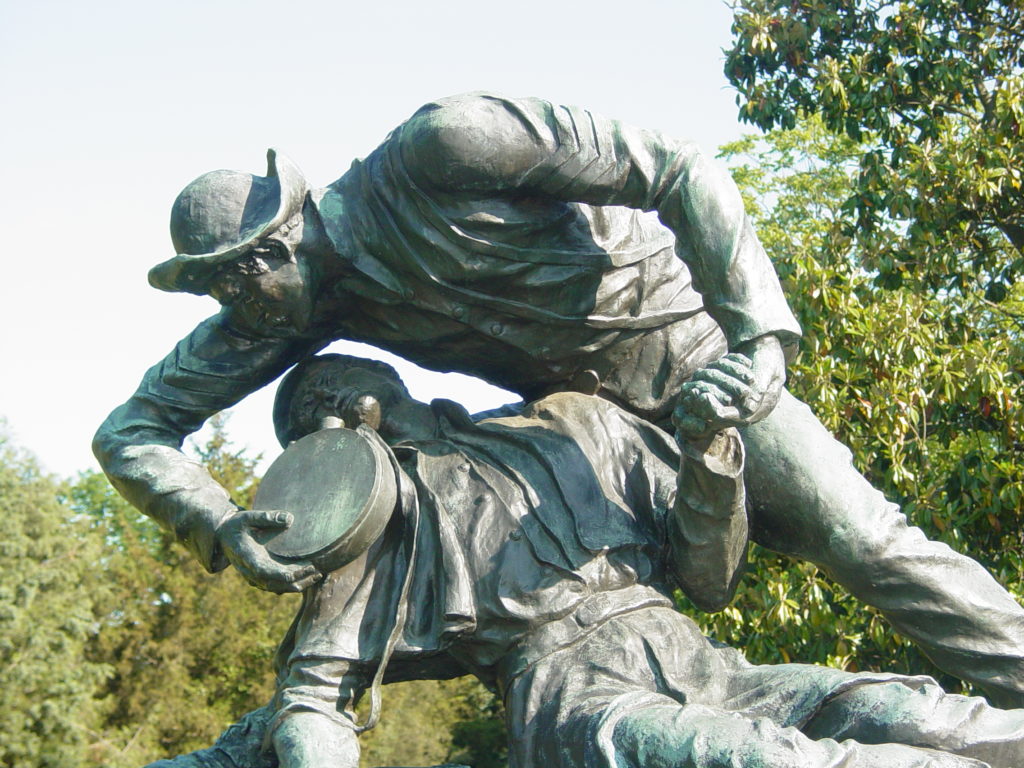 For the purposes of this post, I want to leave behind the narrow question of whether the actions described in the postwar sources are believable. Following my last post I want to see how we can use the Kirkland monument to introduce students to a more complex understanding of how Civil War soldiers viewed one another.

The Kirkland monument certainly captures those strong feelings of reconciliation that have, in part, defined Civil War memory since the early twentieth century. Americans may have fought against and killed one another for over four years, but it never fully silenced those strong bonds of affection for one another that led to such acts of kindness as depicted in the Kirkland monument.

Students could certainly spend time reflecting on the intent or meaning of the monument by focusing on its dedication in 1965, at the height of the civil rights movement and at the end of the Civil War centennial.

I am more interested, however, in how the monument shapes how we understand the horrific violence that took place in Fredericksburg on December 13, 1862 and elsewhere. The Kirkland monument captures an act of kindness in complete isolation from the wide range of emotions that Civil War soldiers would have experienced that day and following countless other battles. It is as much, if not more, about how Americans have chosen to remember violence than anything having to do with what happened that day.

It’s not that I don’t believe that such an act could have happened. My concern is that it simplifies the soldiers’ experience and moves us further from coming to terms with how these men attempted to come to terms with the act of killing and other emotions.

Consider this passage from Lt. William Cowper Nelson (17th Mississippi), written a few weeks after the Seven Days’ Campaign in the summer of 1862:

Well Tom I have been in a big battle, and I can tell you  that it is not much fun: it all sounds very well on paper, crimson glory and undying fame, but when you see men falling all around you, and others hobbling off the field, groaning and with the blood streaming from their wounds, you think very little of such things. I always had a great desire to be in a battle, but that desire has now been gratified, and I am not so anxious now, but still I am ready to meet them, whenever it becomes necessary. It is probable that there will be a good deal of hard fighting yet, before the “Rebellion” is subdued…

I feel very ferocious toward these ruthless invaders of our loved South, but when I seem them wounded and prisoners in our hands all my enmity vanishes. I visited a farmhouse near the battleground several days after the fight and there saw dozens of poor wounded fellows, with but one man to wait on them all. I filled with water, the canteens of several of them before I left, for which they appeared to be very grateful.  (p. 94)

There are certainly other primary sources that can be used, but what I like about this one is that the act of kindness and sympathy exhibited by Nelson toward those wounded Union soldiers does not exist in isolation from his anger. Nelson invites the reader into his own conflicted world and it is here where students stand to learn the most about the Civil War and how soldiers struggled to understand their actions. It should come as no surprise that Nelson continued to struggle with this conflict of emotions throughout the war.

The Kirkland monument is a wonderful teaching tool that can be used with student groups. As I suggested above it tells us a great deal about how Americans have chosen to remember their civil war and the violence that ensued, but when placed in relationship with another source it can also be used to uncover or highlight its limitations to understanding history.

We need to engage our students around the tough questions when visiting battlefields like Fredericksburg and Gettysburg. Soldiers like Nelson struggled physically, psychologically and emotionally during the war. A meaningful student experience should also involve a certain amount of struggle as well if we have any hope of understanding what happened and why.