Why Former Slaves Can Claim the First Memorial Day

Every year since its publication in 2011 I share a piece written by historian David Blight that lifts the veil on what is very likely the first Decoration (Memorial) Day celebration. It’s a wonderful example of how history is lost and later remembered and why. On May 1, 1865 Charlestonians black community (mainly former slaves) gathered at the city’s Washington Race Course and Jockey Club, where Union prisoners had been kept during the war. They decorated graves, listened to patriotic speeches, and beautified the grounds with new paint and built an archway over the entrance that read, “Martyrs of the Race Course.”

The war was over, and Memorial Day had been founded by African-Americans in a ritual of remembrance and consecration. The war, they had boldly announced, had been about the triumph of their emancipation over a slaveholders’ republic. They were themselves the true patriots.

Yesterday historian Ethan Kytle shared a wonderful newspaper clip from a speech delivered by James Redpath in 1869 in which he explains why this event should be remembered as the first Decoration Day celebration. 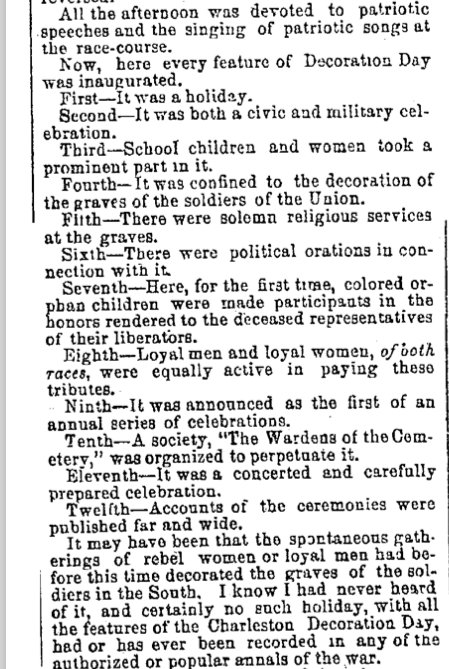 There is a boldness in the way Redpath makes his argument, especially in his insistence that this celebration was “confined to the decoration of the graves of the soldiers of the Union.”

Kytle’s recently co-authored book with Blain Roberts – which I can’t recommend enough – offers much more detail about the history and memory of this particular event. It turns out that it has been remembered and forgotten more than once.

It is entirely appropriate that over 150 years later it is former slaves who offer a reminder of the true meaning of Memorial Day to all Americans.