Not All Acts of Confederate Monument Vandalism are Equal

This morning I learned that the Texas monument, located on the Wilderness battlefield in Virginia, was recently spray painted with some colorful language. It’s the latest in a long string of incidents that extends all the way back to the war itself. Plenty of people are outraged, including Chris Mackowski, who shared his thoughts about this latest incident at Emerging Civil War. 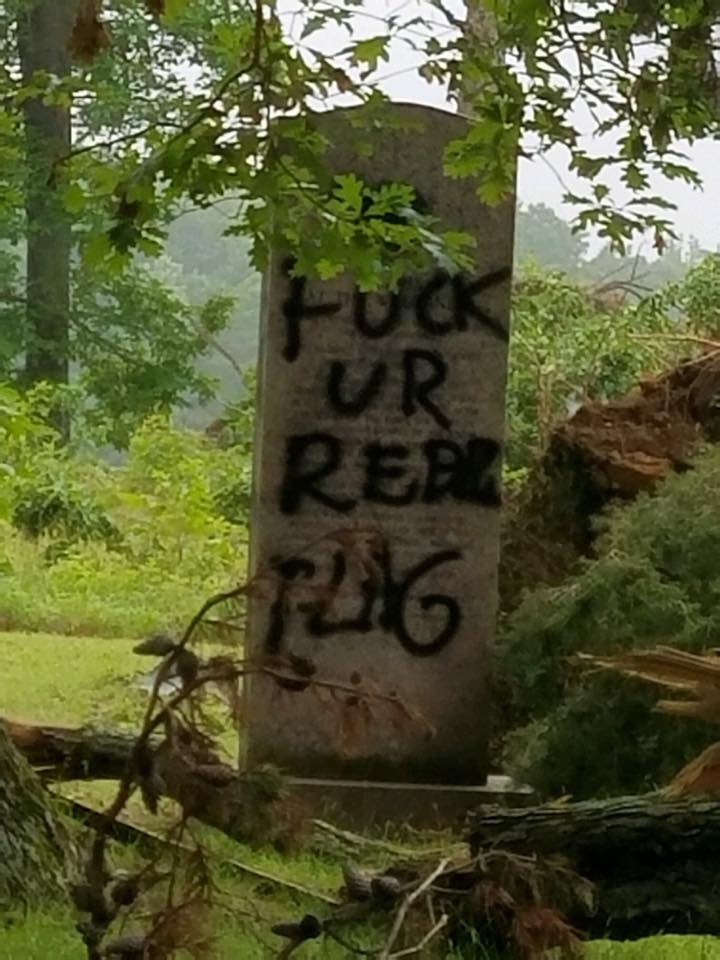 Texas Monument at the Wilderness Battlefield

Mackowski makes a number of compelling points, but I disagree with his central argument:

Regardless of where you stand on the topic of Confederate monuments, there are two essential points here. First, vandalism of any sort is bad, and we should certainly hate to see it at a National Park; and second, nowhere in the swirl of controversy over Confederate monuments have I heard anyone credible seriously suggest that such monuments are in any way out of place on national battlefields.

Fundamentally, we miss a great deal concerning the political import of acts of vandalism if we simply reduce them all to the same category. Certainly, the word choice for the Texas monument is problematic, in part, because the intended message is unclear. There isn’t much of anything to reflect on and as a result it is easily dismissed as a senseless act of vandalism.

But what about other examples of vandalism? Consider the Confederate monument in Charlotte, North Carolina that was vandalized in 2015 with the names of the nine Charleston murder victims. Should this be treated as the same sort of vandalism that was committed at the Wilderness or is there something more to learn and consider here?

I brought this example up with a group of high school students yesterday and they offered a number of thoughtful interpretations. One student suggested that the original inscription reflected the idealism and ideology of the white community while the spray painted names revealed an “uncomfortable reality.”

Consider for a moment the more recent example at UNC-Chapel Hill, where Maya Little covered the “Silent Sam” monument with red paint mixed with her own blood. Here is how she explained it:

I smeared my blood and red ink on the statue because the statue was lacking proper historical context. This statue, Silent Sam, was built on white supremacy. It was built by white supremacists. It was built by people who believed that Black people were inferior and wanted to intimidate them. So these statues were built on Black blood. These statues symbolize the violence toward Black people. Without that blood on the statue, it’s incomplete, in my opinion. It’s not properly contextualized.

In doing so Little acknowledged the very dedication ceremony of this monument, which included a speech by Julian Carr, who shared a story in which he admitted to ‘horse-whipping a black woman on campus shortly after the war.

There is a great deal to learn from just these two examples of vandalism. You don’t have to agree that vandalism is appropriate. You can call for the prosecution of its perpetrators but we should be able to recognize that monuments can serve as rallying points for calls of justice and a reckoning with the past.

As for the perpetrator of the vandalism in the Wilderness, perhaps he/she should have spray painted a few words from Texas’s Declaration of Causes of Secession:

We hold as undeniable truths that the governments of the various States, and of the confederacy itself, were established exclusively by the white race, for themselves and their posterity; that the African race had no agency in their establishment; that they were rightfully held and regarded as an inferior and dependent race, and in that condition only could their existence in this country be rendered beneficial or tolerable.

That in this free government all white men are and of right ought to be entitled to equal civil and political rights; that the servitude of the African race, as existing in these States, is mutually beneficial to both bond and free, and is abundantly authorized and justified by the experience of mankind, and the revealed will of the Almighty Creator, as recognized by all Christian nations; while the destruction of the existing relations between the two races, as advocated by our sectional enemies, would bring inevitable calamities upon both and desolation upon the fifteen slave-holding states.

Better yet, run off a couple hundred copies and place them in a small box next to the monument to remind visitors that these men didn’t just fall out of the sky one day and start shooting at one another.