Looking Beyond the Removal of Confederate Monuments

Earlier this week the Southern Poverty Law Center released an updated version of its 2016 report on Confederate symbols titled, Whose Heritage? The report and accompanying data is well worth reading. Make sure to download the data set, which includes a breakdown of Confederate symbols that have been removed over the past few years by state, county, and city. I was surprised by a number of their findings.

I don’t take issue with the SPLC’s accompanying analysis of their data, but I was struck by their reminder that since 2015 only 110 Confederate symbols in public spaces, including monuments, memorials, and battle flags have been removed while 1,728 still stand. The emphasis on these two numbers is clearly intended to demonstrate that work toward additional removals is necessary and justified. 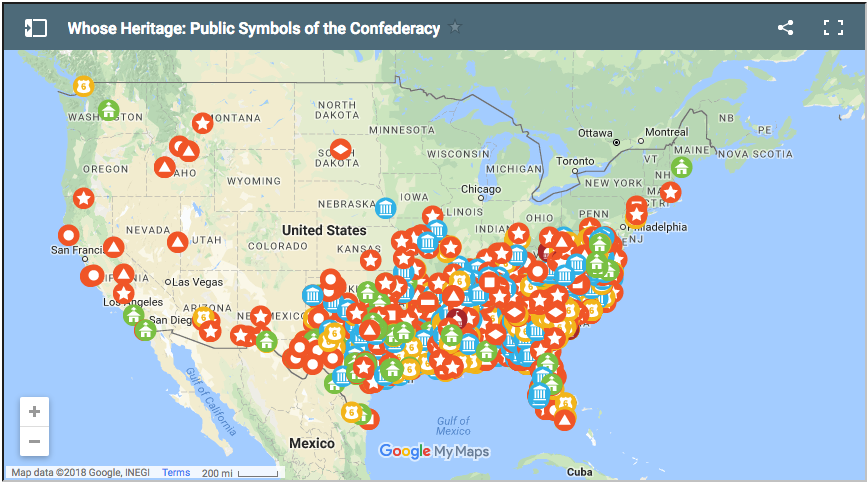 These two numbers are prominently featured in the headlines of news stories that are now making the rounds on social media. It’s the SPLCs call to arms.

Admittedly, these numbers reveal a great deal, but they obscure as much, if not more. For instance, we know very little about how the public debate continues to impact communities that chose to maintain their Confederate monuments in place. We might find that in some places the debate has led to new forms of commemoration in these public spaces. The debate may be bringing new voices and ideas to the surface that will shape how the past is remembered in these communities moving forward.

In other words, we need to remember that these communities are more than just their Confederate monuments. This is probably the most important thing I have learned over the past few years having traveled extensively around the country working with teachers, students and the general public.

I want to know how that monument fits into the broader commemorative landscape of the community. What other monuments can be found? What kinds of events take place in these spaces? What, if any, activities/programs take place throughout the year that involve public remembrance of local, regional, and national history? How do local residents understand their collective past and their own values as reflected in their public spaces? What is missing? What do they see as problematic? Who is working on these issue and what are their plans moving forward?

We do a disservice to individual communities if we reduce them to a statistic in this regard. Richmond is not Memphis; Charlottesville is not Birmingham and so on. Their Confederate monuments exist in very different environments with local histories that overlap and diverge at different points in time. As a result, each of these communities face a unique set of questions, challenges and opportunities in confronting the issue of what, if anything, to do with their Confederate monuments.

In the end, the vast majority of Confederate monuments will likely not be removed for any number of reasons. That fact cannot and should not prevent communities from mobilizing local resources, talent, and creativity to think anew about how remembrance of the past can bring people closer together today. Those that do will continue to strengthen their communities and enrich their local commemorative landscapes beyond the Lost Cause with or without the Confederate monuments.