The “Baghdad Bob of the Civil War”

I want to preface this post by sharing that the response to the release of Searching for Black Confederates have been overwhelmingly positive. The pre-release sales far exceeded by expectations and I couldn’t be more encouraged by the responses I have received over email and social media. Last week I spoke at the Atlanta History Center to a packed crowd, where we sold out of books.

Tomorrow evening I will speak at the Massachusetts Historical Society and next week begins an extended tour that will bring me to the National Archives in D.C., Hood College in Frederick, MD, the University of Maryland at Baltimore, and the Virginia Museum of History & Culture in Richmond.

Of course, I anticipated less than positive responses from the usual suspects, though nothing that I have seen reflects a careful reading of the book. Not surprisingly, the responses so far from this corner are heavy on personal attacks and defensive posturing.

What I love about Mr. Randall Scott’s colorful response is the way in which it reasserts the ideological foundation of the black Confederate myth. A couple passages stand out. 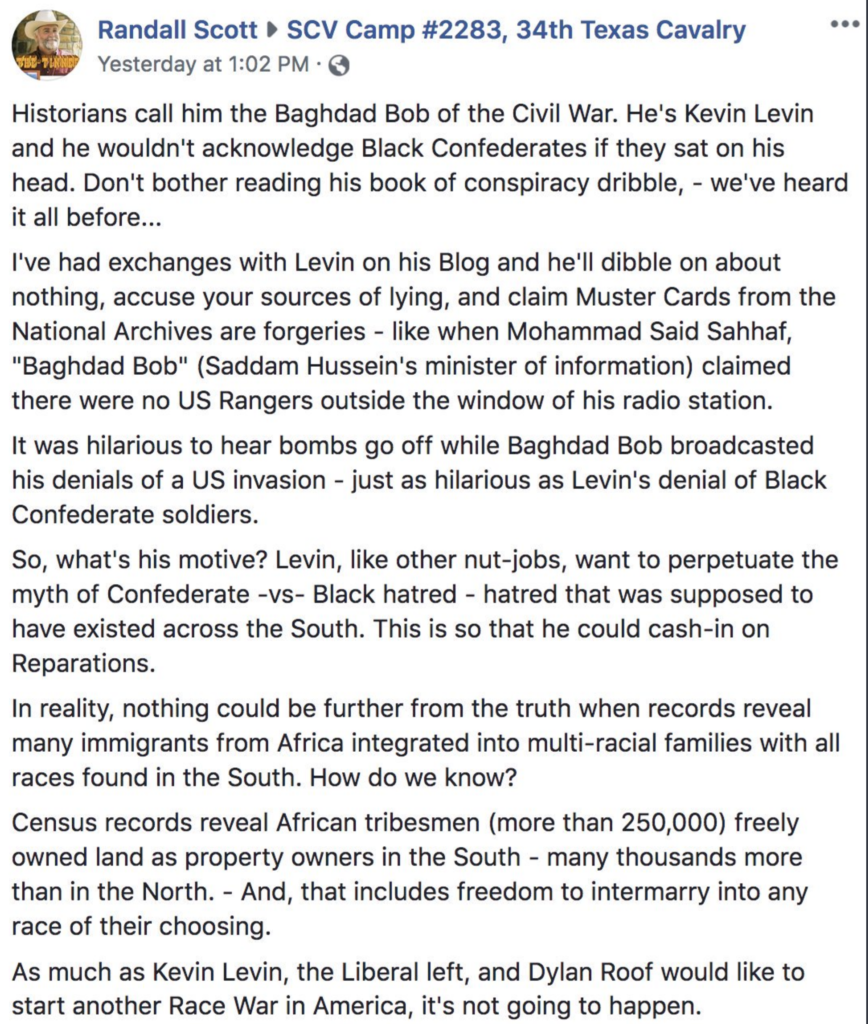 My motive for writing this book, according to Mr. Scott is “to perpetuate the myth of Confederate-vs-Black hatred- hatred that was supposed to have existed across the South.”

That’s right. I am the the one pushing myths. The Confederacy, it turns out was a beacon of civil rights and equality for roughly 3.5 million enslaved people. Had it won its independence these individuals would surely have lived peaceful lives completely integrates with white men and women.

This is the Lost Cause narrative expressed in the most ludicrous terms possible.

According to Mr. Scott, a book that exposes the myth of the “loyal slave” and places slavery at the center of the Confederacy, where real Confederates understood it to be between 1861 and 1865, is taking us down the road toward “another Race War in America.”

I assume that most sensible people will look at this and just laugh, which is about all it deserves. That is was posted on an SCV Facebook page does nothing to reinforce their credibility. In fact, it does the exact opposite. I can’t help but think that I’ve managed to push a few buttons over there.

Leave a Reply to bebowreinhardCancel reply

Previous post: Today is the Official Publication Day for *Searching for Black Confederates*