Over the past few weeks I’ve been working away at constructing Robert Gould Shaw’s early life. I don’t know how much time I will spend on it in the biography, but I am looking for anything that might help me better understand his later development during the war.

Luckily, his letters have been digitized by Harvard University and are easily accessible. I have to say that it is a pleasure working with Shaw’s letters, which are beautifully written. It’s a nice break from some of the letter and diary collections that I’ve had to work with in the past.

Today I came across a very interesting passage in a letter that Shaw wrote to his mother while he was studying in Hanover, Germany in 1855. Rather that have me describe it why don’t you read it for yourself. 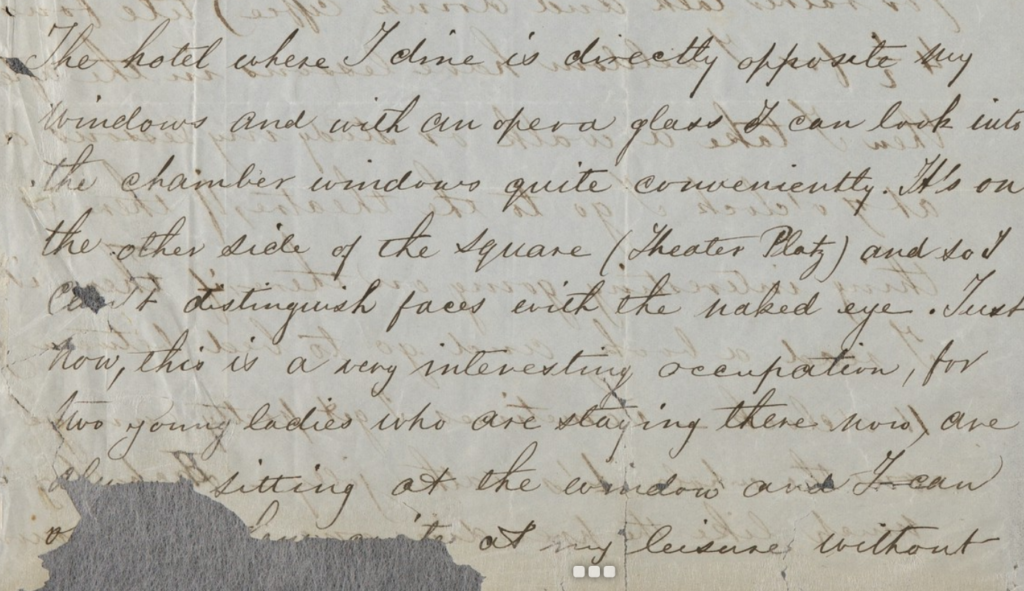 The words covered up at the end are likely, “observe them quite” and the letter trails off with, “at my leisure without their seeing me. Two new opera songstresses live there too.” Again, this was written to his mother.

I don’t know what to make of this right now. I don’t know of any other examples like this from young men from Shaw’s social class.

One thing that emerges in Shaw’s overseas letters is his conviction that he had been abandoned by his parents. He clearly did not want to remain on his own away from his family. On more than one occasion he pleaded with his mother for permission to return home. Perhaps this was his way of convincing her that the development of his moral character would be undermined the longer he remained in Europe. I really don’t know.

Previous post: We’ve Lost One of the Giants of Civil War History