Should the Freedmen’s Memorial Stay or Go?

Last night I sat in on a Boston Arts Commission meeting about Thomas Ball’s Freedmen’s Memorial located on Park Square. This is a copy of the original that was dedicated in Washington, D.C. in 1876. The memorial is once again in the news after a young Black resident called for its removal a few weeks ago. I shared my thoughts about it in a recent op-ed.

The meeting was an opportunity for residents of Boston to share their thoughts about what should be done. One of the speakers was a young Black woman who lives in an apartment next to the memorial. She described the pain of having to walk by this site every day with her young son, who constantly asks why a Black man that looks like his daddy is down on his knees in front of a white man. By this point she was in tears and her impassioned testimony almost brought me to tears. 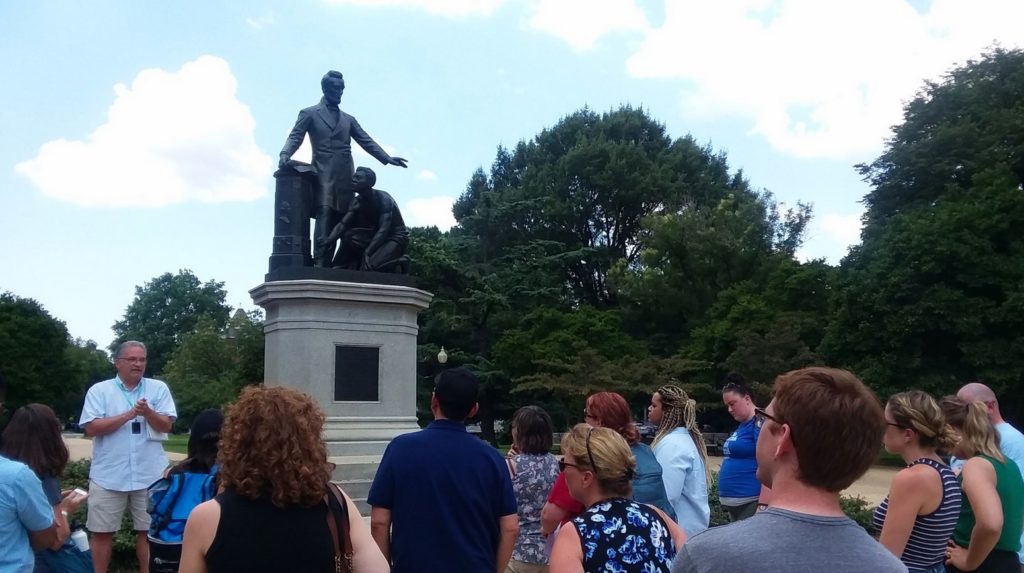 Leading a discussion for history educators at the Freedmen’s Memorial in D.C. (2019)

Shortly after the meeting concluded I came across historian David Blight’s op-ed about the Freedman’s Memorial in D.C. His position is clear:

Rather than take down this monument to Lincoln and emancipation, create a commission that will engage new artists to represent the story of black freedom from one generation to the next. Let today’s imaginations take flight. Perhaps commission a statue of Douglass himself delivering this magnificent speech. So much new learning can take place by the presence of both past and present. As a nation, let’s replace a landscape strewn with Confederate symbols with memorialization of emancipation. Tearing down the Freedmen’s Memorial would be a terrible start for that epic process.

Blight makes as convincing a case for maintaining this memorial in situ as anyone could possibly do, but between this op-ed and the personal testimony above lies the rub and the question of whether these two perspectives can be reconciled.

I am not sure they can.

Previous post: So This is the Historical Context You Were Looking For