This has been a monumental week on Richmond’s Monument Avenue. The city wasted no time taking advantage of a new law that allows communities to decide the fate of their Confederate monuments. On Wednesday crews removed the Stonewall Jackson monument at the intersection of Arthur Ashe Boulevard and Monument Avenue. The following day Matthew Fontaine Maury was removed. Both are now in an undisclosed location.

But that is not the only thing that caught my attention. Over the past few days a number of historical markers have appeared along Monument Avenue. They were designed by a group calling itself “History is Illuminating” and at first glance they appear to look like the more traditional roadside markers that can be found at historic sites throughout Virginia and elsewhere. They are anything but traditional. 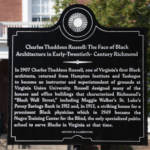 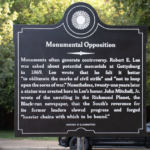 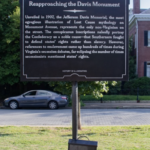 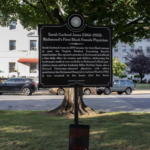 Historical markers have long been seen as a way to contextualize a historic site. The narrative helps to situate a landscape, home, statue, etc. within a broader history. The language is professional and intended as a neutral interpretation of the subject. Though this is not always the case, markers help to explain why the site in question has been and will continue to be preserved.

We don’t see this here. These markers are going up along Monument Avenue as the city and state begin the process of removal. Their narratives are intended to explain and even justify why the Confederate monuments are being taken down.

What I find so interesting is the way these historical markers blur the lines between history and activism. While they convey a narrative steeped in historical fact, they do not reach for objectivity or allow the reader to step back into a neutral space. The text undercuts any notion of neutral space.

The markers represent the latest example of the way in which a neighborhood that was intended for whites only is now being reclaimed by the rest of the city.

Clearly, these markers have a limited shelf life. The narratives work in conjunction with the process of removal, but it does raise the question of whether interpretive markers will find a place on this re-imagined urban landscape. My hope is that the city can find a way to tell the full story of why these monuments were created, sustained for so long, and finally removed in 2020.

The removal of monuments continues to be framed as an attempt to erase history, but over the past few weeks we’ve seen the opposite in the former capital of the Confederacy. It is history that has propelled people to take to the streets and make demands on their local government.

It is the acknowledgment of history in these historical markers that is helping to reshape a city and give new direction to its future.