The latest news out of Virginia suggests that it is just a matter of time before the Robert E. Lee monument in Richmond is removed. Lee will follow the same fate as Stonewall Jackson, Jefferson Davis, J.E.B. Stuart, and Matthew Fontaine Maury, who once looked down on the people of Richmond from atop their pedestals along Monument Avenue.

Looking back on the events of the last eight months I for one am glad that it has taken this long to bring about Lee’s final removal. The delay has given Richmonders the opportunity to rewrite the history of the Lee monument and Monument Avenue. When its history is written it is this final chapter that will overshadow the rest of the story. The significance of this cannot be overestimated. 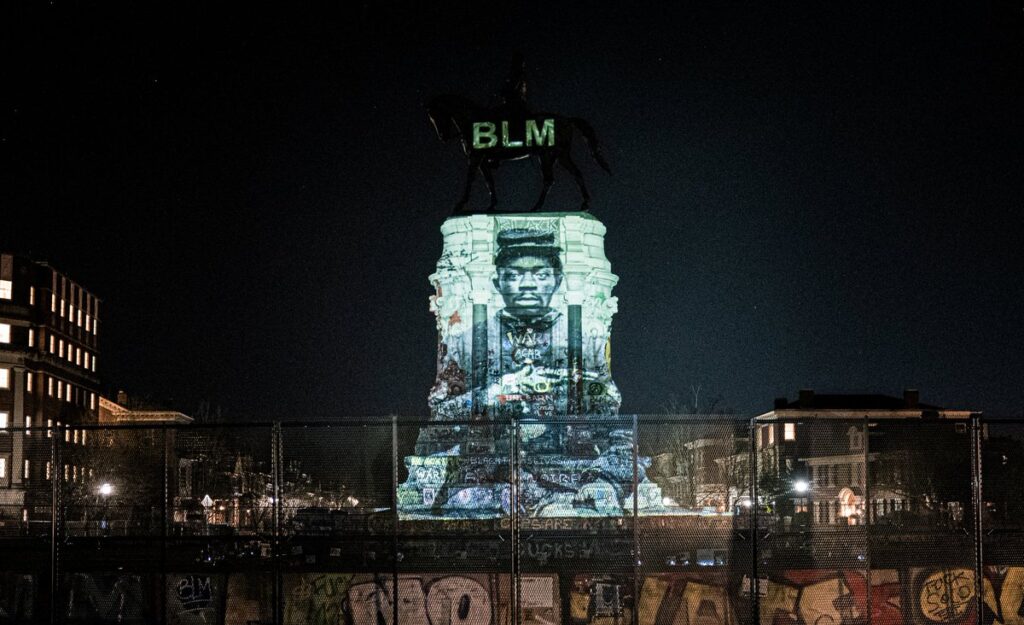 This reinterpretation of the monument has taken many forms, including the tagging of the monument itself, speeches, voting drives, memorials, music, dance, and the addition of temporary wayside markers. All of this has succeeded in smoothing the rough edges of this “blunt object.” The site has become a gathering place for all Richmonders as opposed to its original purpose of reinforcing segregation through a celebration of the Lost Cause.

People who were never intended to gather and celebrate at the base of the Lee monument by monument boosters, real estate developers, and the people who eventually made the West End neighborhood their home have done so by taking ownership of the space and imposing their own shared history on the monument itself.

The most powerful way in which this has been accomplished is through the images projected onto the monument at night. This began over the summer with projections of George Floyd, Frederick Douglass, Harriet Tubman, and John Lewis. Of all the forms of reinterpretation witnessed the turning of Lee’s massive pedestal into a screen on which to project images of African Americans has proven to be the most powerful.

The most recent image is that of a soldier who served in the United States Colored Troops. I suspect that the choice of soldier was not by accident.

This picture is of Sergeant Nimrod Burke. Originally from Prince William County, Virginia, his family had been freed and moved to Ohio. In 1861, Burke was a teamster and scout for the 36th Ohio infantry. In 1864, he joined the 23rd USCT and was promoted to sergeant. This picture is widely circulated—in some cases, as an unidentified soldier. His family now has a website devoted to him.

Burke is just one of many of the soldiers in the 23rd who were from Virginia. We have traced men back to the city of Fredericksburg and the counties of Caroline, Culpeper, Fauquier, Orange, Prince William, Rappahannock, Spotsylvania, and Stafford. Many of these men escaped from slavery during the Union occupation of Fredericksburg from April to early September 1862, when over 12,000 slaves escaped their ‘masters.’ These men escaped only to come back and fight with the United States Colored Troops – many of them with the 23rd USCT.

The choice of Burke is a reminder of the role that thousands of Black Virginians played in helping to preserve the Union, end slavery, and destroy the Confederacy. But the juxtaposition of the image and the Lee monument is also a reminder that the Confederate monument landscape all but obliterated the history of Black Virginians during the Civil War, reducing them to “loyal slaves.”

It is the delay in removal that has afforded this opportunity to rewrite the history of the Lee monument and Civil War memory in Virginia, but more importantly, the efforts of activists and artists, and the participation of the broader community has placed the city of Richmond in a unique position where it can now engage in the hard work of transforming this space into something that reflects the shared values and history of everyone.

Leave a Reply to zcrockett53Cancel reply

Next post: Confederate Monuments Should Remain on Civil War Battlefields